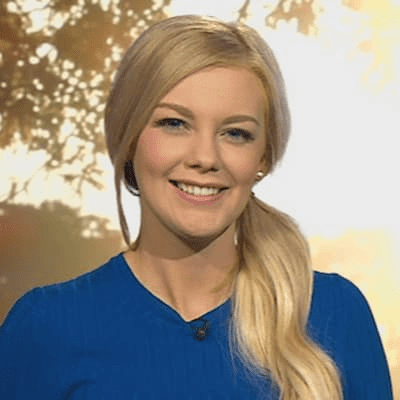 Kesley Redmore is a media personality serving as a Weather Presenter and Production Journalist at ITV Wales in the United Kingdom. She previously worked as a Freelance Reporter for The Wave and Swansea Sound.

In 2012 the weather presenter graduated with a Bachelor of Arts degree in English Literature (British and Commonwealth) from Aberystwyth University. She later did her Post Graduate Diploma in Broadcast Journalism at Cardiff University and graduated in 2013.

Her parents are Steven L. Redmore and Ceri Redmore. The bond between her and the parents is strong and genuine as portrayed during the time she was in isolation at home with the fear of Coronavirus symptoms. Kesley is the only child.

She expressed gratitude to her boyfriend who stood with her during the time she was self quarantined at home. However, no clear information about whether she is married or not.

She spent two weeks at home in quarantine after getting some coronavirus-related symptoms and feeling awful. Kesley recounts how it had been a bit of a tough two weeks being ill at home on her own.

“I was worried and anxious as I didn’t know whether I had the virus or not, or whether I would get worse. But I’m just glad that I’m back to feeling like myself again and I’m grateful that I had my family, boyfriend, and kind neighbors to help me out when I needed supplies (as well as the dropping off some cards and daffodils) to keep me going”, she said.

After completing her university studies in 2012, she served as a reporter for the South Wales Evening Post over the summer. Between September 2012 and January 2013, Redmore served The Wave and Swansea as a radio station reporter and later worked as a researcher at ITV Wales, then returned to the radio station for a period of 4 months before rejoining the ranks of ITV Wales in June 2013. She initially worked as a freelance reporter before climbing to be a production journalist at ITV in Nov 2013. The multi-skilled media personality was later promoted to being a weather presenter in February 2017.

The Production Journalist and Weather Presenter at ITV has done a variety of interviews and features, one of them included spending time with a hawk named Jack. She has also reported on Cardiff Bay’s Aquapark. Kesley is known for live presenting and reporting experience, self-shooting, story-finding, and digital skills, a hard-working, dedicated professional who is equally comfortable working alone or as part of a team.

Kesley Redmore Salary And Net Worth

Details about her earnings and net worth are still not updated yet.