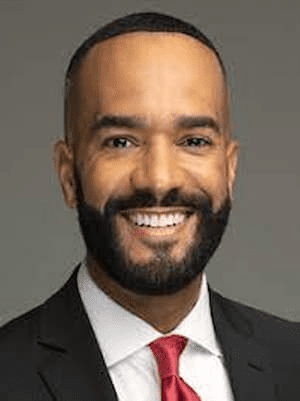 Rodney Dunigan is a media personality serving as the Managing Editor and anchor of the weekend evening newscasts on ABC 6 and Fox 28 News. He joined ABC 6 and FOX 28 news teams in October 2017. Previously, he was a reporter for WFTS-TV in Tampa, Florida.

He graduated from Tougaloo College in Mississippi with a Bachelor of Arts Degree in English with an emphasis in Journalism in 2002.

Rodney is married to his wife Jackie Orozco, a journalist. She co-anchors the weekend morning show of Good Day Columbus on ABC6 News and FOX 28.

The couple tied the knot in September 2015. They also have two kids; a daughter named Alexandria Dunigan and a son named Blake Noah Dunigan born on Friday, December 18, 2020.

Dunigan is the Managing Editor and anchor of the weekend evening newscasts on ABC 6, as well as Fox 28 News. He has been an anchor, reporter, and producer. He joined ABC 6 and FOX 28 news teams in October 2017.

Prior to Columbus, Dunigan worked as a reporter for WFTS-TV in Tampa, Florida. At WFTS, he also served as a Scripps “Leadership Champion” and ethics committee member. He has a long reputation as a newsroom leader and team player.

Before Florida, Dunigan served as the morning anchor at WATN in Memphis, TN. He has also spent time working in newsrooms in Nashville, Dayton, and Jackson, MS.

His work in Mississippi helped him win the Mississippi Association of Broadcasters Award in the Documentary Category. He has also been featured in several publications including the Communicator and Nashville’s SixFifteen Magazine.

On a personal note, Dunigan has a passion for serving the youth in the community. He has been involved with numerous community service programs with school districts as well as volunteering as a “Big” with Big Brothers Big Sisters. As a result of that commitment to the community, he was honored by Iota Phi Lambda Business & Professional Sorority. The organization highlighted him as one of their “Outstanding Business Leaders.”

Dunigan is also an avid runner. He has participated in a number of full and half marathons; including the Rock’N’Roll Marathon in Phoenix, Arizona, the Gupton Dodge Tom King Classic Half Marathon, and the Music City Marathon. He is a native of Chicago and a member of the Kappa Alpha Psi Fraternity.