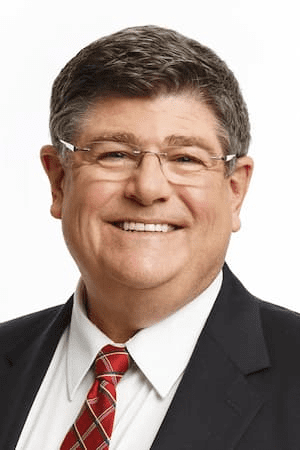 Ganahl graduated from High School in 1966 and studied Meteorology in College.

He started his job as a weatherman after High School.

“Well, I started weather when I was 17 and it’s a very, very simple story. When I was 12, I was not doing well in school and the TV guys were missing the forecast for snow days. And all I cared about was snow days. But after high school, I walked into the TV station in Waterloo, Iowa, and said, ‘I can do the weather better than the guy you have doing it.’ And shortly thereafter he was gone and they allowed me to do that. I was on TV six nights a week, at the 6 and the 10 o’clock news and that was 50 years ago today,” Ganahl says.

Jym’s mother named him Jym-with a “y”-because she didn’t want him to be called James. The nuns in Catholic school still called him James.

“I have 7 grandchildren in one family…but my shopping is done and wrapped and ranges from Batgirl costumes to Game Stop stuff. That is what happens when they range from 3 to 17,” he says.

Despite being a known media personality Jym has managed to keep his personal life away from the limelight. Therefore, he hasn’t revealed whether he is married, single, or in a relationship.

Ganahl is the on-air meteorologist for WSYX-TV Channel 6 for the noon broadcast with Terri Sullivan.

“Terri is great to work with; we have a great rapport,” Ganahl said.

But he is also known to many native central Ohioans for his time as the evening meteorologist for WCHM-TV Channel 4, from 1979 to 2016, often interrupting primetime broadcasts to report on tornado threats and other dangerous weather that typically occur in the late evening. Ganahl also was the on-air meteorologist on WNCI 97.9-FM for 40 years while at NBC; today he does the same for WTVN 610-AM and WCOL 92.3-FM.

His first turn on the air came at another NBC affiliate, KWWL-TV in Waterloo, where Ganahl was hired weeks after graduating from high school in 1966.

“I walked into the TV station (in Waterloo) and told them I could do a better job than who they had,” Ganahl said.

By fate, that weatherman already was leaving the station, providing Ganahl with an opportunity.

During his time at the Waterloo station, Ganahl also served in the U.S. Army. After Ganahl’s enlistment, the Army learned he had a college degree in meteorology and assigned him to a helicopter unit where he gave weather briefings to pilots, a job he continued with the Iowa National Guard until 1976.

“I love winter,” both for the beauty of snow and ice, Ganahl said, but also because it is less hectic to report on snow systems than fast-developing summer storms.

However, it was an iconic winter storm — the blizzard of 1978 — that played a role in Ganahl’s arrival in Columbus. He was interviewing for a job at Chicago’s WGN-TV when a colleague in Detroit recommended him for the job in Columbus at NBC-4.

“(Columbus) had just had back-to-back hard winters, and I was from upper Midwest; they wanted someone from a cold-weather climate that really understood these blizzards,” Ganahl said.

After coming to NBC-4, Ganahl becomes connected to the community in other ways. He taught science at St. Agatha School in Upper Arlington and also for a gifted program taught in the summer at Ohio Wesleyan. Ganahl also performed in the cast of Tecumseh, an outdoor drama in Chillicothe, and for Shadowbox Live, a comedic troupe.

In September 2016, he retired from WCMH-4 but said he felt “lost” and within a year began exploring options which led to his hire at WSYX-6 in October 2017.

Inviting Ganahl back on air was “a no-brainer,” said Jamie Justice, news director for WSYX-6.

“I had an opening for a meteorologist, and Jym was the first person to come to my mind. He is a legend in Columbus so I picked up the phone and called him,” Justice said. “He told me he wasn’t ready to retire, and I told him I wanted him to be a part of my team.”

“I felt lost like many do when retiring and that I had lost my purpose. Thanks to Jamie for finding me,” Ganahl said.

In the summer of 2012 Jym revealed the results of his summer-long weight loss journey where he lost 50 pounds. He was also encouraged to adopt a low-sodium diet.

Ganahl developed congestive heart failure in 2013 and was hospitalized for three weeks in the Intensive Care Unit.

Years later in 2019, he suffered an irregular heartbeat. He was admitted with atrial fibrillation, a condition that can lead to blood clots, stroke, heart failure, or other heart-related issues.

According to the station, during his hospital stay, doctors removed 3700 ccs of fluid from his lungs. Ganahl said this was a relapse of heart failure from six years ago.

“My first relapse of heart failure in six years triggered by the sudden appearance of AFIB for the first time ever. Extracted 3700 ccs of fluid from lungs. Finally, on the diet, I should have been doing and many of you encouraged me to do. Down 23 lbs. Could not even walk with a walker after being released from the hospital so spent a couple of days with my daughter. Home now and walking without a walker at all,” Ganahl wrote on his official Facebook page.