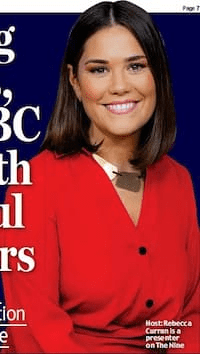 Rebecca Curran is a media personality serving as the co-presenter of the daily news programme The Nine on BBC Scotland Monday-Thursday between 21:00 and 22:00 alongside Martin Geissler. Previously, she worked at the BBC’s Aberdeen newsroom as a senior broadcast journalist.

She studied Publishing with Journalism at Robert Gordon University in 2015.

Curran was born in Aberdeen, Scotland. However, there is no information about her family background, parents’ identities, and siblings.

Rebecca has been married to her husband Ewan Waugh, an IT consultant. The couple wedded in 2019.

In September 2021, BBC Scotland confirmed that Rebecca was pregnant and would take maternity leave.

Curran is a presenter of the daily news programme The Nine on BBC Scotland. She moved into her new role as co-anchor after two years in BBC Scotland’s busy Aberdeen newsroom. Widely recognized as one of the most tenacious broadcast journalists in the country, she has a wide-reaching and proven track record in reporting a diverse range of subjects ranging from hard-hitting investigations to moving human interest stories.

She started her career at Northsound Radio and then spent three years at STV before joining the BBC in 2016.

Curran was appointed co-presenter of the daily 9.00 pm news programme The Nine on the newly created BBC Scotland channel along with Martin Geissler in July 2018 with the channel launching on 24 February 2019