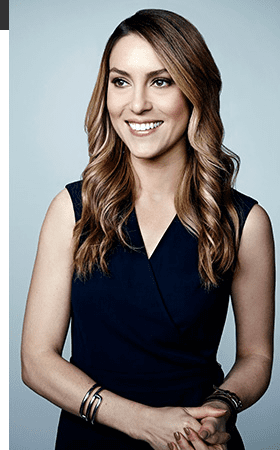 Rachel Crane is a media personality serving as an innovation and space reporter for CNN. She joined the network in April 2014. Previously, she spent a period of time covering breaking news as a general correspondent for CNN. She also worked at Bloomberg TV as a reporter.

Crane stands at a height of 5 feet 7 inches tall.

In 2008, she graduated with a Bachelor of Arts degree in Religious Studies from Princeton University. She also received a Master’s degree in News and Documentary Film from New York University in 2011.

Her mother, Wendy Hoffmann is a casting director and voice actress while her father was nicknamed Monster when he worked for the government.

Recently learned that my father’s nickname when he worked for the government was Monster. Thanks for the genes pop.

Rachel who is very close to her mother enjoys posting her mother on her social media pages.

My everything. Aka mom. pic.twitter.com/NLUNvEnj9w

Crane married her long-time boyfriend Andrew Marks on October 7, 2017. They got married in the French Riviera with a ceremony at the Villa et Jardins Ephrussi de Rothschild.

The couple first met in high school and they started dating in 2015. They later got engaged in March 2017. Her husband, Andrew is an investment banker and the son of billionaire Howard Marks.

Crane is an innovation and space reporter for CNN. She creates original video content to be shown across CNN’s platforms, including the original series, City of Tomorrow, which highlights innovations in cities around the world, Elon Evolution, which explores the greatest problems plaguing the globe with Elon Musk, Pioneers with Rachel Crane, which profiles the great minds who are pushing the boundaries of human achievement, Way Up There, which takes a deep dive into the future of space exploration and Mission Ahead, her latest series that explores people and companies that are taking on issues like cancer, climate change and poverty by thinking out of the box.

Previously, she was covering breaking news as a general correspondent for CNN, covering the Travel Ban and a terrorist attack.

Prior to joining CNN she was a technology and innovation correspondent for Bloomberg TV. In this role Crane served as host and producer of “Bloomberg Brink,” a show highlighting cutting-edge technology and new ideas, and “The Next Space Race,” taking viewers on a journey through the thriving space exploration industry. Before, Crane also produced and hosted “I Believe,” a web series on religion in America, “Fleeing the World” a series on the business of flea markets, and a documentary on homeschooling titled “Home Ed”.