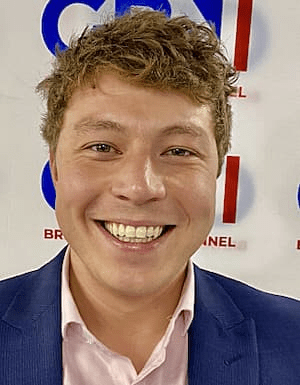 Patrick Christys is a media personality serving as a Presenter at GB News. He co-hosts To The Point with Mercy Muroki from 9 am-12 pm on weekdays. He also hosts Friday Night Feast, a GB News online show from 7-9 pm.

Christys is originally from Cheshire. He belongs to the white ethnicity and he is also British by nationality.

From 2010 to 2013, Patrick attended the University of Nottingham where he studied for a Bachelor’s degree in Politics. In 2020 while continuing his media work, he embarked on a legal career at the University of Law graduating in 2021 with a Graduate Diploma in Law.

When asked what matters to him outside politics Patrick said: “My family – we’re a small unit (Mum, Dad, and Grandma) but we’re mighty!”

He is also an only child in his family. “I always wanted to be a war correspondent but as an only child, I felt I couldn’t put my parents through that,” he said.

Christys is in a relationship with Alex Lingwood. The couple resides in London and they have two cats named Magda and Cora.

Patrick is a Presenter at GB News. He co-hosts To The Point with Mercy Muroki from 9 am-12 pm every weekday.

Originally from Cheshire, Patrick started his professional life as a local reporter in Cumbria at the wonderful Westmorland Gazette. He was fortunate enough to catch the back end of old-school local journalism – covering everything from murder trials to sheepdog trials.

Patrick moved to London to become a reporter and Overnight Editor at Express.co.uk and DailyStar.co.uk at the time of Brexit, Trump’s election victory, and the migrant crisis, which was a steep learning curve. He has reported from the Syrian and Iraqi borders, made a documentary covering the migrant route through Morocco and into Spain, and had stories on the front page of several national newspapers investigating domestic terrorists.

Radio came calling and Patrick worked under the infamous Kelvin MacKenzie at Love Sport Radio as Head of Content across the station, and host of the Breakfast Show, where he won the Radio Academy’s prestigious 30 Under 30 Award. Like him or loathe him, it’s a privilege for Patrick to have worked in such close quarters and learned from someone of Kelvin’s stature at such a young age.

Patrick was then the youngest ever presenter on talkRADIO, hosting their Drive Time show before making the move to GB News, where he co-hosts To The Point with Mercy Muroki from 9 am-12 pm every weekday.

Patrick Christys Salary and Net Worth