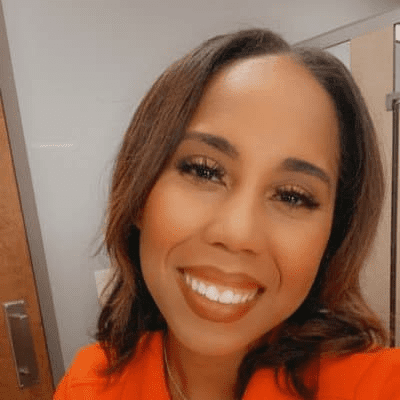 Nicole Phillips is a Two-time Emmy-Award-winning Morning Meteorologist at WRBL in Columbus, GA. She joined WRBL in April 2019 and can be seen every morning from 5 AM to 7 AM and again at 12 PM. Previously, she worked as the Morning/Noon Co-Weather Anchor at KSHB, Kansas City, MO.

Phillips graduated from the University of Oklahoma with a Bachelor of Science in Graphic Information Sciences and a Minor in Meteorology in May 2013. While there, she was involved in the Oklahoma/NASA EPSCorR space grant program. She was also selected together with a group of her peers to visit NASA’s JPL.

She is originally from Wichita, Kans as. However, there is no information about her parents and siblings.

Nicole is married. However, her husband’s identity is unknown. In her free time, you can find Nicole traveling with her husband and cheering on the Oklahoma Sooners, OKC Thunder, and Kansas City Chiefs.

Phillips is a Two-time Emmy-Award-winning morning meteorologist at WRBL in Columbus, GA. She joined the First Alert Weather Team in April 2019 and can be seen every morning from 5 AM to 7 AM and again at 12 PM.

Originally from Wichita, Kansas, Phillips started her career at WETM in Elmira, New York as the morning and noon meteorologist. During her time in New York, Phillips assisted the Chief meteorologist in severe weather coverage such as tornadoes and snowstorms. From here she went on to become a morning meteorologist at KSHB in Kansas City, Missouri.

While in Kansas City, Phillips spent time forecasting challenging weather such as snow and ice storms, tornadoes, floods, and dangerous heat; with some of these occurring all within 24 hours. Phillips provided live shots from Kansas City to the Weather Channel during the Oak Grove tornado in 2017 and the flash flooding moving through the Kansas City metro in 2018, it was this coverage that she earned an Emmy. She also worked on special assignments such as the Great American Solar Eclipse in 2017 and severe and winter weather specials where she won an Emmy for her involvement in the 2017 winter weather special.

Her dedication to community outreach led her to serve on the board of Awesome Ambitions, a mentoring and college preparedness program for high girls in the Kansas City metro, and volunteer with sisters in STEM and KC STEM Alliance.

As an undergraduate at the University of Oklahoma, Phillips was involved in the Oklahoma/NASA EPSCorR space grant program and was selected with a group of her peers to visit NASA’s JPL. She also interned at KSN in Wichita, Kansas, Shell Oil company in Houston, The Weather Channel, and Fox 25 in Oklahoma City, Oklahoma where she assisted in severe weather coverage for the 2013 Oklahoma tornadoes.