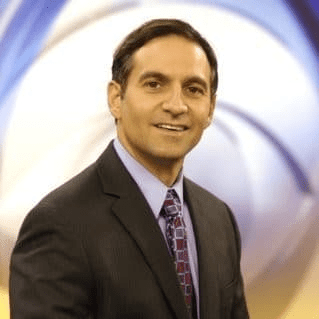 Bob Jeswald is a media personality serving as the Chief Meteorologist at WRBL. He joined WRBL in August 2006. Previously, he worked as a Meteorologist at Meredith Broadcasting, KPHO in Phoenix, Arizona.

Jeswald earned a Bachelor of Science in Media Communications from Medaille College in 1989.

Jeswald grew up in Buffalo, New York, and was a hard-nosed hockey player. However, there is no information about his parents and siblings.

Bob is married to his wife Teresa. The couple met in Columbus, Georgia. Together, they are blessed with kids who are now adults. They also have grandchildren.

Jeswald is a Chief Meteorologist at WRBL. He launched his broadcasting career after he graduated from Medaille College.

His first stop was at a TV station in Binghamton, New York where he served as a chief meteorologist. That was the beginning of his television career which has now spanned three decades.

From New York Jeswald ventured south to Columbus, Georgia, Jackson, Mississippi, then on to Las Vegas, Nevada, honing his meteorology skills with each stop. He spent ten years in Vegas working at three different stations.

In 2004 Jeswald joined the weather team at KPHO in Phoenix, Arizona where he worked for three years.

Subsequently, in 2006 he returned to Columbus, Georgia where he had met his wife Teresa earlier. He came on board as a chief meteorologist at WRBL and put down roots in the community. He proudly follows in the footsteps of previous chief meteorologists at News 3, including the legendary Doug Wallace and Mitzi Oxford.

Jeswald has been a trailblazer in weather forecasting in the Columbus market. He initiated the concept of the First Alert Weather Team, which reflects his personal commitment to being first in getting critical weather information on the air and online.

The weather may be Jeswald’s specialty, but it’s certainly not his sole focus. His name is synonymous with dozens of charity events that he proudly hosts each year. Never will it ever be said that Jeswald is a man without a cause.