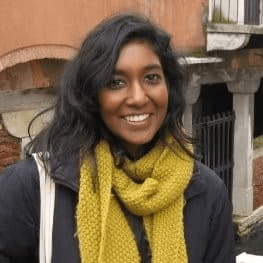 Nalini Sivathasan is an award-winning media personality serving as a journalist at BBC News. She joined BBC News in December 2016. Previously, she worked as a video producer for the Financial Times.

From 2000 – 2005, Nalini attended Blackheath High School. She then joined St. Olave’s Grammar School where she studied from 2005 – 2007. In 2010, Nalini graduated from the University of Leeds with a Bachelor of Arts in English Literature. Subsequently, she earned a Master of Arts in Journalism from Goldsmiths, University of London in 2011.

Sivathasan grew up immersed in her parents’ religion, Hinduism. But in recent years she’s found it harder to connect with her faith, and speaking to other young people she isn’t alone.

However, some are breaking with traditions and connecting with their faith in unique and personal ways, such as volunteering or using social media.

Despite being a media personality Nalini has managed to keep her personal life away from the limelight. Therefore, she hasn’t revealed whether she is married, single, or in a relationship.

It is also not known whether she has kids or not.

Sivathasan is a journalist at BBC News. As the BBC Asian Network’s first video journalist, she pitch, film, produce and edit videos. These are published on Asian Network’s digital platforms and often appear across BBC platforms including World Service radio/TV, Radio 4, News Channel, and Newsbeat. She has also produced and presented long-form documentaries and often writes online pieces.

In November 2020, Sivathasan won a BBC News Award for ‘Exceptional Contribution Throughout COVID-19 Lockdown’, for her work producing coronavirus guidance/advice videos in five South Asian languages. These videos which were all produced remotely during the lockdown provided much-needed public service journalism for audiences who were confused by the government’s lockdown rules. Since then, they have been shared by councils, schools, and health associations.

Sivathasan is also part of BBC News Next Generation Panel, which helps feed a younger generation’s perspective to BBC News Group Board and other senior BBC figures. As well as looking at BBC News’ output the panel looks at ways of making the BBC a more inclusive place to work in. They have run events including ‘Pitching to editors, ‘Trauma reporting’ and ‘Reporting on death and grief’.

Prior to joining BBC News, Sivathasan held various positions at The Financial Times.