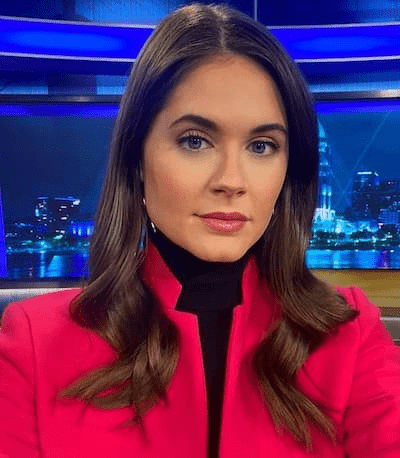 Lair celebrates her birthday on June 4th every year. However, her exact age is unknown. On June 3, 2018, Mollie posted that she is in her 20s through a tweet.

Thanks for the birthday wishes! And to the viewer who told me “you look good for your age”… I’m in my 20s so that was random but @CourtisWLWT really enjoyed it hahaha https://t.co/bYaLNL7yMc

She joined Elon University in 2007 and graduated with a BA in Broadcast Journalist in 2011.

Lair was born and grew up in the United States. However, she has managed to keep a low profile on her family. It is also not known if she has any siblings. Details regarding her family will be updated as soon as it is out.

Mollie is married to her lovely wedded husband Henry G. Miller with whom they are blessed with a daughter.

Lair joined WLWT as a weekend evening anchor and reporter in August 2017. Previously, she worked at KFVS-TV from September 2015 to July 2017 as a Weekday anchor and reporter. She was the anchor of Heartland News Now (weekdays at 4 pm). She also launched the show on Sept. 8, 2015 and doubled the viewers within the first year.

In addition, Mollie was one of the producers of the “Good News Now” segment of the newscast. She wrote and approved scripts and engaged viewers on multiple social media platforms including Facebook and Twitter. She also worked as a weekend anchor and multimedia journalist for one year and eleven months.

Previously, she was a general assignment reporter for WTAP from September 2011 to September 2013. Prior to joining WTAP, she was a Medical Unit intern for CBS Evening News with Katie Couric from June 2010 to August 2010. She also worked with producers and correspondents to research stories, pull archived footage, pre-interview characters, take notes during interviews, and transcribe interviews. Additionally, she reported and helped produce a 3-minute segment for a group project that was shown to CBS executives.

Lair was a London Bureau Intern for NBC News(August 2009-December 2009) where she developed writing, filming, and researching skills. While there she developed a stronger understanding of international politics. She is a member of NABJ (National Association of Black Journalist) and Broadcast Media.

Where is Mollie Lair going?

There has been no news or information of Mollie leaving WLWT. Any information concerning her departure will be updated.

Following her professional career as a journalist, Mollie has been able to accumulate an estimated net worth ranging between $100k-$1 million.