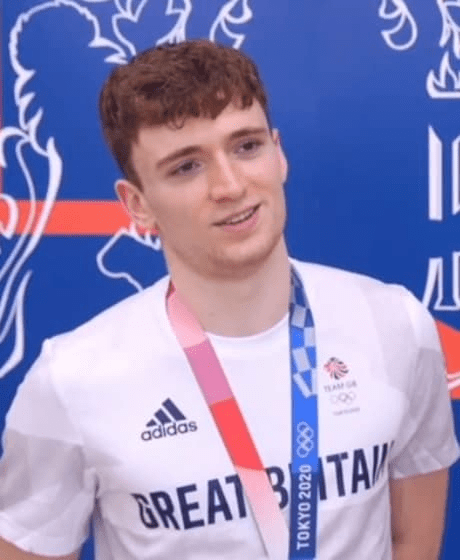 Matty Lee (Matthew Lee) is an Olympic Diving Champion. He is also a contestant on the twenty-first series of I’m a Celebrity…Get Me Out of Here!.

Lee is a member of the club Dive London. He is mentored by coaching legend Jane Figueiredo, famously the long-term coach of Daley, and the Russian divers Vera Ilyina and Yuliya Pakhalina who won gold at the 2000 Olympics held in Sydney.

“I did gymnastics and swimming when I was younger but I wanted something more, which is why I moved into diving. It’s a very challenging sport, but a good sort of challenging – plus it’s fun! It is quite a scary sport though, because everything rests on the day. We train twice a day, six days a week but when you get to a competition people will only see six dives and you’ve got one shot at each of them – it’s like taking six penalties at the World Cup!” Matty said.

Matty is the son of Helen and Tim. Unable to travel to Japan, his parents invited friends to their home in the city to watch the synchronised 10-metre platform competition in which Matty participated.

They had planned to go to Tokyo to watch their son but the Covid restrictions made it impossible.

“To have everybody round – Matty’s friends, close family and some of my friends – it was amazing,” his father said.

“With the result, it was even more amazing,” he added.

Lee also has an elder brother named Tom. During an interview when asked how old he was when he started diving. He said: “I was 7 years old when I took up diving, and it was my older brother who got me into it. Back then it was a niche sport so we’ve got no idea how he got into it in the first place! These days Tom Daley has really helped bring the sport into the spotlight and generate a lot more interest in it, which is great.”

Lee isn’t married. However he said: “He gives me advice about anything whether it is relationships or whatever – I always ask Tom.”

In November 2021, Lee was announced as a contestant on the twenty-first series of I’m a Celebrity…Get Me Out of Here!. The show kicked off on Sunday (November 21, 2021) at 9pm on ITV. It will continue every day at the same time.

At the 2017 European Diving Championships in Kyiv, Lee won a bronze in the Men’s 10-metre platform, and a gold in the mixed 10 m platform synchro with diving partner Lois Toulson. The pair then won a silver at the 2017 World Aquatics Championships in the 10 m mixed synchro.

He has an estimated net worth of £1 Million.