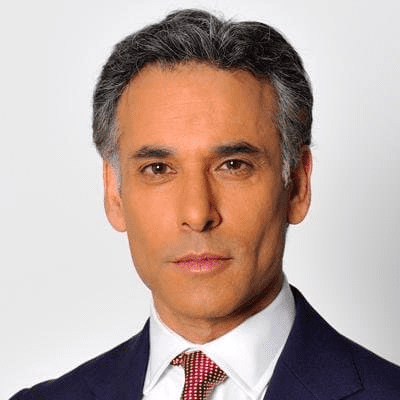 Matthew Amroliwala is a media personality serving as the main presenter for BBC World News’s flagship news and discussion programme Global with Matthew Amroliwala. He joined the international news channel in September 2014.

He belongs to the British nationality.

Amroliwala graduated from the King’s School, Ely, Cambridgeshire. He also received degrees in Law and Politics from Durham University in 1984.

Matthew was born Mehrwan F. Amroliwala in Leeds, West Riding of Yorkshire. His father was a Royal Air Force officer while his mother is unknown.

His roots are in India, and he is a Parsi Zoroastrian. As his family name denotes, his ancestral hometown is Amroli in the Surat District of the state of Gujarat in western India. However, he hasn’t shared whether he has siblings or not.

Amroliwala is married to Jackie Long, a social affairs editor and presenter for Channel 4 News. They tied the knot in June 1999 in London.

The couple has five children, three daughters, and two sons and they live in London. Four of their children are; Milo Amroliwala, Louis Amroliwala, Mary Amroliwala, and Mabel Amroliwala.

Amroliwala is the main presenter for BBC World News’s flagship news and discussion programme Global. He joined the international news channel in September 2014 after being a lead presenter on the BBC’s UK rolling news network for 16 years.

Matthew joined the BBC in 1989. Prior to joining BBC, he worked as a chartered accountant. In 1990, he became a BBC network television correspondent. In 1997, he joined the BBC News Channel as a presenter of the channel’s evening programmes, and from the beginning of 2001, he has presented the late afternoon news programme, first with Jane Hill and then with Maxine Mawhinney. Additionally, in April 2006, he was reunited with Hill on the 11 am–2 pm shift until March 2013 when the duo moved to the 2 pm–5 pm slot on Tuesday to Friday; Emily Maitlis co-presented on Mondays.

He has covered many major news stories, including reporting extensively from Northern Ireland. He has also reported from Bosnia on the fall of Srebrenica and traveled throughout the Balkans during the conflict in Bosnia. Since January 2008, he has co-presented the programme Crimewatch with Kirsty Young and Rav Wilding (later Martin Bayfield), specializing in solved cases, but missed the March 2015 episode, and was covered by Jason Mohammad.

Since 8 September 2014, he has presented the flagship programme Global on BBC World News, the BBC’s international news channel. On 27 June 2016, he presented his first edition of World News Today on the channel and BBC Four.

He was nominated by the Television and Radio Industry Club as Reporter of the Year in 1993 for his reporting on the Troubles in Northern Ireland.

Amroliwala is in perfect health condition as of 2021. However, back in 2015, he said; “I’m not good with jet lag. No matter what I do, I end up going to bed ill after a trip. I’ve tried everything, from staying awake through the flight, timing my sleep pattern to fit the correct time zone, even vitamin C, but I still end up feeling disastrous.”