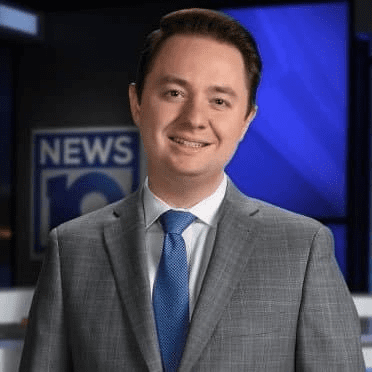 Despite being a media personality, he has managed to keep his personal life away from the limelight. Therefore, he has not revealed the date, month, or year he was born.

Mackie is American by Nationality.

He graduated from Florida University with a bachelor’s degree in Meteorology. While there, he served as a forecaster and producer for FSU Weather, a student-produced, nightly cable television weather show.

Matt joined News10 as the weekend morning meteorologist in June 2019.

Matt grew up just outside of Washington, D.C. in Bethesda, Maryland. Snowstorms, heat waves, and the occasional hurricane got him passionate about the weather.

In 2016, he got to experience the destructive power of tropical weather firsthand when Hurricane Hermine passed over Tallahassee. Matt also spent a year at the university’s study center in Valencia, Spain.

After college, he moved to Macon, Georgia (home to Little Richard, Otis Redding, and the Allman Brothers!) to work as a Meteorologist and Reporter at WGXA-TV. Matt was on air for hours at a time during 2017’s Hurricane Irma, keeping viewers safe as gusty winds and torrential rain swept through Middle Georgia. He did it again during 2018’s Hurricane Michael and provided coverage to his sister station in Albany, Georgia when 70-mile-per-hour winds took them off the air.

As a reporter, he covered everything from storm damage to breaking news and city council meetings. He even dabbled in investigative reporting, helping a group of Alabama students find one of their science class projects… a weather balloon that went missing over Georgia!

He is excited to be at News10, taking on the challenge of forecasting New York, Vermont, and Massachusetts weather! After a few years in Florida, and Georgia, he can’t wait to see snow again this winter. If the weather is calm, he’s always on the lookout for a fun place to take.