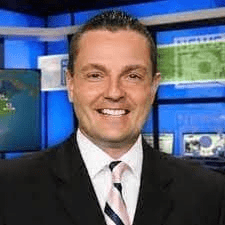 Drawbridge graduated from Lyndon State College where he earned a Bachelor of Arts in communication and Metrology.

Despite being a media personality, he has managed to keep his personal life away from the limelight. Therefore, he has not disclosed information concerning his parents’ and siblings’ identities.

He is married to his lovely wife though the name of his wife is not disclosed to the public. The duo has been blessed with a daughter Emily whom he loves so much. Additionally, he posted his daughter’s photo on April 15 wishing her a happy birthday.

When Tim isn’t doing the weather, he’s balancing life with his daughter while mixing in the gym, yoga, some fun in the kitchen – yes, the dude can cook, bake, and grill . . . and some fun in the dirt – landscaping and gardening – obviously, when it’s warm.

Tim joined NEWS10 in July 2013. He along with Cap, Rob Lindenmuth, Matt Mackie, and Jill Szwed love the weather and strive to deliver accurate forecasts that allow you to plan your day and keep your family safe.

He actually wandered the hallways of NEWS10 during his first internship with Cap in 1991 while also filling in at WNCE-TV (Channel 8) in Glens Falls. He grew up on the East End of Long Island and is a graduate of Lyndon State College which is located in the Northeast Kingdom of Vermont.

Tim is a member of the American Meteorological Society holding their TV Seal of Approval since August 1998. He also has been recognized by Metroland Newsweekly as “Best TV Weather Anchor” in their yearly, staff-compiled “Best of the Capital Region in 2004, 2007, and again in 2011.

His career began at WVNY in Burlington, Vermont late in 1993. A year later, he was off to Central Kentucky and WLEX. He spent three years forecasting the weather and dealing with the severe weather challenges of the Bluegrass State. He received accolades for his severe weather coverage having been nominated and commissioned as a Kentucky Colonel by a member of the former Lexington office of the National Weather Service. As well, Tim had the opportunity to co-host the Miss Kentucky Gala while also becoming familiar with the fun of Kentucky basketball, the Kentucky Horse Park, Keeneland, and The Kentucky Derby.