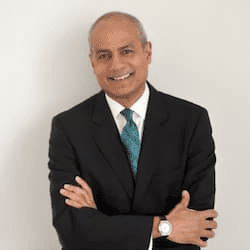 George Alagiah is a media personality serving as an author and presenter at NEWS 10 ABC. Previously, he was the presenter at BBC News at Six.

Alagiah went to Christ International School in Ghana where he pursued his primary education. Later on, he joined Roman Catholic school in Ports mouth, England.

He also studied Politics at Van Mildert College, Durham University. While in Durham he wrote articles for the students’ newspaper Palatinate. He also served as an editor for the newspaper.

He is the son of Donald Alagiah and Therese Alagiah. His parents both Sri Lankan Tamil raised him alongside his four sisters; Mari, Rachel, Christine, and Jennifer. He is the third born. He has two elder sisters and two younger ones.

His father was a civil engineer. In 1961, his parents relocated to Ghana in West Africa. His father got a government job there. However, in 1996 his mother passed on.

In 2003 his father’s condition worsen. Donald has had leukemia in a low-grade form for years, managed with pills, but then in 2003 it became more acute and he needed chemotherapy and blood transfusions. Years later, he is alive and living independently.

He is married to Frances Robathan, whom he met at Durham University. The couple has two children, Adam and Matthew. He lives in Stoke Newington, North London.

Alagiah began his career as a print journalist for South Magazine. In that position, he served for seven years. Later on, he joined BBC as a developing World correspondent. He also served as the Southern Africa Correspondent. During his tenure, he did coverages on events such as the Rwanda genocide, the plight of the Marsh Arabs in southern Iraq, and civil wars in different countries including Afghanistan, Liberia, Sierra Leone, and Somalia.

In 2000, Alagiah was part of the BBC team which collected a BAFTA award for its coverage of the Kosovo conflict. He has won numerous awards including Best International Report at the Royal Television Society in 1993 and in 1994 was the overall winner of the Amnesty International UK Media Awards. He was appointed Officer of the Order of the British Empire (OBE) in the 2008 New Year Honours.