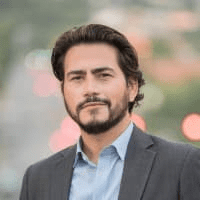 José Martínez is a media personality serving as a Bilingual News Reporter and Fill-in Anchor for WFMZ-TV 69 News. He joined WFMZ-TV 69 News in June 2020. Previously, he worked as a Reporter for NY1 Noticias and El Diario de Nueva York, covering news on politics, education, and immigration from the NYC City Hall and the NYPD.

Martínez was born in Colombia. However, his age is unknown.

He is Latin American.

Martínez graduated from the University of Cartagena in Colombia in 2012 with a Bachelor of Arts in Journalism and Communications (Broadcast Journalism). Through a series of fellowships, he continued his studies in Broadcasting News at the University of Central Florida in Orlando from 2014 – 2015, and at The City University of New York (CUNY) Graduate School of Journalism in 2016.

There is no information about his family. It is also not clear whether he has siblings or not.

Despite being a media personality José has managed to keep his marital status away from the limelight. Therefore, it is not known whether he is married, single, or in a relationship.

José is a bilingual reporter and fill-in anchor for 69 News: Edición en Español, covering stories throughout the Lehigh Valley and Berks County.

He previously worked as a reporter for NY1 Noticias in New York City where he broke important stories about the immigrant communities in the city, highlighting issues like unsafe working conditions, sexual harassment, and other violation of labor laws and regulations.

José has been a correspondent in the United States for Ycodendaute Radio Tenerife, Spain, and an immigration analyst for BronxNet News. He is the former Editor-in-Chief of the online edition of Noticia Long Island, where he was also director and host of the online talk show ‘Café con José.’

In a 2017 profile, Noticia called José a “dedicated reporter” and “a rising star” who “is a voice for the Hispanic and immigrant community.” Among other recognitions, José received a 2017 and 2019 Media & Journalism Award from the Colombian American Chamber of Commerce and Nassau County, New York, and the Media of the Year in Latinus 20 Under 30 2017.

José worked at El Tiempo and City TV in Colombia where he was born. He is a member of the Education Writers Association (EWA) and the National Association of Hispanic Journalists (NAHJ).

José Martínez Salary and Net Worth