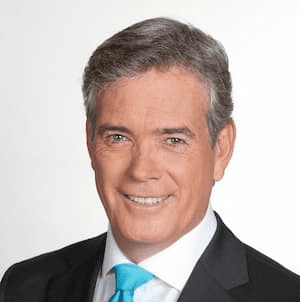 John Roberts is a Canadian-American media personality serving as the co-anchor of America Reports on FOX News Channel (FNC). He joined the network from CNN as a senior national correspondent in January 2011, based in the Atlanta bureau. Previously, he was FNC’s chief White House correspondent.

Roberts attended Erindale and Lorne Park Secondary School before graduating from the University of Toronto’s Erindale College at Mississauga.

John was born in Toronto, Ontario, and grew up in Mississauga, Ontario. His father died when he was five years old, and his mother died in 2010. He also has a brother and a sister.

John is married to Kyra Phillips, an Investigative Correspondent for ABC News. The couple has been engaged since 2010 and is now married.

Kyra was born in Illinois in 1968 and she studied journalism at the University of Southern California (USC).

In 2009, the couple crossed paths while both working for CNN. John announced his engagement to Kyra on April 25, 2010.

Roberts serves as the co-anchor of America Reports (weekdays, 1-3 PM/ET) on FOX News Channel (FNC). He joined the network from CNN as a senior national correspondent in January 2011, based in the Atlanta bureau.

Previously, Roberts served as FNC’s chief White House correspondent where he reported on the top headlines emanating out of the Trump administration. In this capacity, Roberts regularly attended White House briefings and covered the 2021 second impeachment of then-President Donald Trump. As chief White House correspondent, Roberts also traveled with the former president, providing live coverage from the 2019 North Korea-United States Summit in Hanoi, Vietnam. He also contributed to FNC’s coverage of President Trump’s 2018 Russia-United States Summit where the former president met with Russian President Vladimir Putin in Helsinki, Finland. During that trip to Europe, Roberts also provided live coverage of the NATO Summit in Belgium as well as President Trump’s visits with UK Prime Minister Theresa May and Queen Elizabeth II. That year he also contributed live reports from the Singapore Summit between the United States and North Korea.

Prior to his role as chief White House correspondent, he covered the 2016 presidential election where he interviewed then-presidential candidates Donald Trump, Carly Fiorina, and Marco Rubio. Additionally, he has provided live coverage during numerous breaking news and political events, including the 2012 and 2016 presidential debates, Democratic and Republican National Conventions, as well as Hurricane Irene in 2011. In addition, Roberts covered the murder trial of real estate heir Robert Durst and the U.S. Ebola outbreak.

A native Canadian, Roberts secured an exclusive interview with embattled Toronto Mayor Rob Ford in 2013 surrounding allegations of his drinking and drug use. He also reported live from Moore, OK in the wake of the deadly EF5 tornado.

Prior to joining FNC, Roberts co-anchored CNN’s American Morning from 2007 to 2010. Previously, he served as CNN’s senior national correspondent and anchor of This Week at War, examining international wars, including those in Afghanistan and Iraq. Throughout his career, he has traveled internationally to report on major developing news, including Yugoslavia during the NATO bombing, the London bombings of July 2005, and the earthquakes in Turkey. Additionally, he has interviewed numerous prominent figures, including former presidents George W. Bush, George H.W. Bush, Bill Clinton, former Vice President Al Gore, the late Yitzhak Rabin, and Pakistani President Pervez Musharraf.

Before joining CNN in 2006, he spent more than 14 years with CBS News, during which he was the chief White House correspondent, chief medical correspondent, and anchor of the weekend editions of the CBS Evening News and CBS Morning News. While there, he was embedded with the U.S. Marines during the war in Iraq and anchored the CBS Evening News coverage of Hurricane Katrina and the death of Pope John Paul II. From 1994-1995, Roberts anchored the evening news on WCBS-TV (CBS 2) in New York. Roberts began his career in Canada, where he worked as an anchor and correspondent for City TV in Toronto and also co-anchored CTV’s morning news program, Canada A.M. from 1990-1992.

Over the course of his career, Roberts has been a recipient of several awards, including an Emmy, a New York Press Club award, and three national Emmy Awards for his coverage of the Atlanta Olympic bombing, the death of Princess Diana, and the TWA crash. Roberts also earned a National Headline Award for his coverage of the crisis along the Israeli-Lebanese border in 2006.

In February 2022, John opened up about his recent health challenges. He revealed that he now has a pacemaker after being recently hospitalized for a heart procedure.

“For folks at home who didn’t know, this time last week I left our show and immediately went into the hospital,” he said in a clip published online by Fox News. “I had not been feeling well for a while.”

John added that a stent put in his heart in 2018 had “blocked back up again, so they reopened it.” “But at the same time, like former Vice President Mike Pence, the electrical circuitry in my heart was going bad, so I’m now battery-powered,” he said, touching his chest. “I’ve got a pacemaker.”

Mayo Clinic describes a pacemaker as a small device used to help control one’s heartbeat and keep the heart from beating too slowly. Also called a cardiac pacing device, a pacemaker is implanted in the chest through a surgical procedure.

In an October 2020 interview with “The Washingtonian,” John opened up about the stents in his heart due to blocked arteries that he attributes to years of smoking.

“Smoking earlier in my life is why I have three pieces of stainless steel in my heart,” he said.