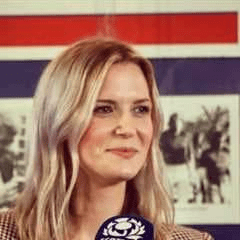 Jo Wilson is a media personality serving as a journalist and presenter for Sky Sports News. She started as a Graduate Trainee at Sky Sports News in 2011, before becoming a sub-editor and then getting promoted to co-producer. In 2015, she became a presenter on Sky Sports News and has since hosted programmes on the sports network.

Wilson was born in 1985, in Perth, Perthshire, Scotland.

Wilson graduated from Glasgow Caledonian University with a Master’s degree in Journalism in 2011. During her studies, she worked at Pizza Hut in Stirling.

Jo is from Perth in Scotland. However, there is no information about her parents and siblings.

As a sprinter and a jumper, Jo represented Perth and her county receiving an athletics scholarship when she was 17. She also spent a year at Stony Brook High School in New York doing athletics and basketball.

Jo is married and lives in the Cotswolds with her partner of six years Dan and their 23-month-old daughter Mabel.

Wilson is a journalist and presenter at Sky Sports News. She mostly presents on Thursday to Saturday from 7 am to 10 am.

Wilson has revealed she has been diagnosed with stage 3 cervical cancer and is undergoing life-saving radiotherapy and chemotherapy treatment.

She went for a routine smear test in June 2022 and was told there were signs of cancer. Further tests a month later showed she had 3b cervical cancer that had spread to two of her lymph nodes.

Wilson told OK! magazine she broke down in tears after receiving the news and asked doctors if she was going to die.

“I cried while a lovely nurse held my hand,” she said. “Then I cried to Dan, and he was quite shocked because he didn’t really think it would be cancer.”

‘You’re not going to die,’ he reassured me. “It’s very treatable, and it’s very curable.”

“I try to hold onto that, but there are no guarantees. The percentages are still a bit ropey. There’s something like a 70 percent success rate for this treatment.

“So I’ll take that. But you do still think about the fact there’s a 30 percent chance it won’t work.

“The lack of control can be quite difficult because the treatment will either work or it won’t. I’m trying to live in the present and get this through.”

Jo Wilson Salary and Net Worth