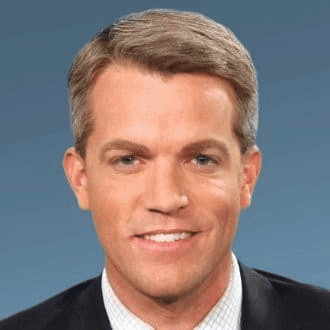 Bachman is around 41 years old as of 2022. He was born in the United States and he celebrates his birthday on December 10th every year.

Bachman graduated from the University of Georgia with a BA in Political Science and an ABJ in Broadcast News in 2003.

He was born to his parents in the United States. However, he hasn’t revealed any information about them. He hasn’t also shared whether he has siblings or not.

John is married to his wife Ariel Bachman. The couple has three kids, two daughters, Addy and Belle, and a son, Walker. His daughter Addy turned 4 years old on December 3, 2022. Belle also celebrated her 11th birthday on October 26th, 2022.

Bachman is the Host and Managing Editor of Newsmax Now on NewsmaxTV. He joined Newsmax Media after more than a decade working as a producer, anchor, and reporter in Atlanta, Augusta, GA, and West Palm Beach Florida television markets. He’s also covered special assignments for CBS News, CNN, and Fox.

Since joining Newsmax in 2011, Bachman has traveled the country and won an award for a documentary he wrote and produced for Newsmax to commemorate 40 American Heroes – which coincided with a special edition of Newsmax Magazine.