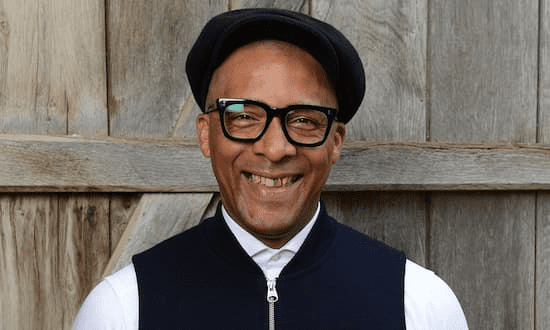 Jay Blades is the BBC presenter on The Repair Shop. He is also a furniture restorer, eco designer and social enterpriser. Additionally, he co-presents Jay and Dom’s Home Fix.

Blades is British by nationality.

Jay left school at the age of 15 without any qualifications. However aged 29 he joined Buckinghamshire New University where he earned a BSc in Criminology and Philosophy. He also set up a charity to teach disadvantaged youngsters about furniture restoration and even picked up the vital skills himself.

Blades grew up on a rundown council estate in East London with his single mother Barbara and his half-brother Justin. His mother moved to the UK when she was 13 years old from Barbados. At the age of 18 she gave birth to Blades. However Blades first met his father, Trevor when he was 21 years old.

“He told me I had four other siblings but I then found out that wasn’t true at all,” Blades said.

“I have 25 in total, including six in America, two in Africa and three in Jamaica. I’ve met 11 of them and I am really close to my half-sister, Sophie.”

Blades also wrote how his father rang him on the pretence he had a painting that needed restoring.

“There was something odd about this call. Something familiar about the voice. But I couldn’t put my finger on it. There was a pause, and then he said: ‘You don’t know who this is, do you?’” Blades wrote.

“I didn’t. And then, a split second before he told me, I did.

“What he said next knocked me sideways: ‘’ay, everything you are doing, all your success on TV with The Repair Shop, that’s all down to me.’ Wow. I was lost for words. I managed to say, ‘Is it?'”

His father told him he was a carpenter and had passed on his ability to him.

On December 24, 2021, Jay got engaged to Lisa Marie Zbozen. Lisa is a personal trainer at TheWKOut. Previously, Jay was in a relationship with his partner Christine Goodman. The duo started dating in 2016 after his marriage to Jade broke down. Christine is a marketing specialist for consumer goods and retailers.

Blades was married to his ex-wife Jade. The ex-couple met while studying at Buckinghamshire New University. Jade was studying BA in Textile Design and Art while Blades was studying BSc in Criminology and Philosophy.

Later on they founded ‘Out of the Dark’, a charitable social enterprise that recycles, restores and revamps salvaged furniture as a means to train, educate and employ young people from disadvantaged backgrounds.

However, their marriage didn’t work out. The couple split in 2015 with Blades revealing he hit rock bottom after his marriage broke down and his charity went bust.

“I left the family home, gave the house to my ex-wife and just drove. I didn’t know where I was going, I slept in my old estate car for three or four days and I was in a really dark place,” Blades said.

Jay has three children. He had two children by different mothers by the time he was 25 years old. His first child was a son named Levi. He also has a daughter named Zola Erguvanli Blades from his previous marriage to Jade. Zola joined Drama School in 2020.

Growing up, Jay didn’t want to follow his father’s footsteps.

“I didn’t even think about settling down. Growing up, I only knew of two families where the mum and dad were married,” Jay said.

“I loved the ladies I was with but things didn’t work out and I moved on, even though I always stayed in touch with my children. I didn’t want to be like my father.”

Jay is the host of BBC’s restoration programme The Repair Shop. The BBC One programme sees a group of experts restore precious family heirlooms to their original, stunning glory. The Show debuted in 2017 on BBC TWO. In 2019 it moved to a prime time slot on BBC One but is now also the face of spin-off show The Repair Shop: Fixing Britain, which takes a deeper look into certain repairs to examine how items shape the way we live now.

He is presenting the BBC spin-off show The Repair Shop: Fixing Britain. In addition to his TV work, he is also the founder of Jay & Co, a social enterprise that helps disadvantaged and disengaged groups.

Jay is also known for presenting Money for Nothing. He has also appeared in Would I Lie To You?, Celebrity MasterChef, Richard Osman’s House of Games and Michael McIntyre’s The Wheel.

In August 2021, Jay had filmed an upcoming documentary programme for BBC1, Jay Blades: Learning To Read at 51, depicting his recent attempts, with the support of the charity Read Easy UK, to learn reading. In 2021 it was announced he would dance with Luba Mushtuk in the 2021 Strictly Come Dancing Christmas Special.

Blades recently fronted BBC One’s spin-off, Jay Blades’ Home Fix. Aided by a rich catalogue of BBC home and garden archive, the programme was designed to inspire viewers to learn new skills for lockdown and beyond, thus helping them to become self-sufficient in their own homes.

Now, he is currently fronting Jay and Dom’s Home Fix along with his Repair Shop co-star, Dom Chinea, where the duo are offering DIY tips and tricks that won’t break the bank.

He is the author of Making It: How Love, Kindness and Community Helped Me Repair My Life. The book was published in May 2021. It is an inspirational memoir about beating the odds and turning things around even when it all seems hopeless.

In this book, he shares the details of his life, from his childhood growing up sheltered and innocent on a council estate in Hackney, to his adolescence when he was introduced to violent racism at secondary school, to being brutalized by police as a teen, to finally becoming the presenter of the hit primetime show The Repair Shop.

Blades is not related to Will Kirk. However the two are co-workers in The Repair Shop.

He has a Gold front tooth.

His net worth is unknown.