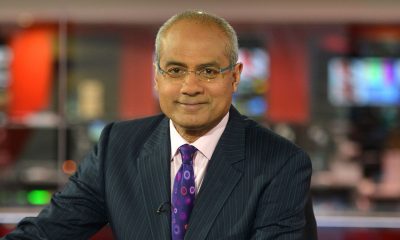 He is a British national born and raised in Colombo, Ceylon. He also belongs to the mixed race.

Alagiah went to Christ International School in Ghana where he pursued his primary education. Later on, he joined Roman Catholic school in Ports mouth, England.

He also studied Politics at Van Mildert College, Durham University. While in Durham he wrote articles for the students’ newspaper Palatinate. He also served as an editor for the newspaper.

George is the son of Donald Alagiah and Therese Alagiah. His parents both Sri Lankan Tamil raised him alongside his four sisters; Mari, Rachel, Christine, and Jennifer. He is the third born. He has two elder sisters and two younger ones.

His father was a civil engineer. In 1961, his parents relocated to Ghana in West Africa. His father got a government job there. However, in 1996 his mother passed on.

In 2003 his father’s condition worsen. Donald has had leukemia in a low grade form for years, managed with pills, but then in 2003 it became more acute and he needed chemotherapy and blood transfusions. Years later, Donald is alive and living independently. Thanks to the team that saved his life including his son, George.

In 1984, he married his wife, Frances Robathan. The couple met while in Durham university. Together they have two sons; Adam and Matthew.

Alagiah began his career as a print journalist for South Magazine. In that position he served for seven years. Later on he joined BBC as the developing World correspondent. He also served as the Southern Africa Correspondent. During his tenure, he did coverages on events such as the Rwanda genocide, the plight of the Marsh Arabs in southern Iraq, and civil wars in different countries including Afghanistan, Liberia, Sierra Leone, and Somalia.

In 2002, George became the host of BBC Four News

Advertisement
which was later renamed The World. A year later, he was appointed as the co-host of BBC Six O’clock News alongside Sophie Raworth until October 2005, and with Natasha Kaplinsky until the year 2007.  He was also the deputy anchor of BBC One O’clock and BBC Nine O’clock News from 1999.

In July 2006 he became the presenter of World News Today and BBC Two which was later renamed to GMT in 2010. He was also the substitute anchor for BBC News at Ten in the absence of Edward and Fiona Bruce. Additionally, he has interviewed famous African leaders including the late Nelson Mandela, Archbishop Desmond Tutu, Koffi Annan, and former Zimbabwe President Robert Mugabe.

His impeccable work has not gone unnoticed. He has received many awards including:

1.In 2001 he received the BAFTA award after doing a coverage on the Kosovo conflict.

2.In 1993 he got the Best International Report award from the Royal Television Society.

3.He got the Amnesty International UK Media Awards in 1994.

4.In 2010 he got the Outstanding Achievement in Television Award.

5.In 2020 his book The Burning Land was nominated for the Society of Authors’ Award. The book has captured the corruption and homicide that occurred in South Africa

He is the author of the following books:

Alagiah was diagnosed with colorectal cancer in 2014. A year later he stated public that his chemotherapy had ended and he resumed his work at BBC in November. In 2018 he was again diagnosed with cancer and he mentioned that the disease was terminal and if he would have gone earlier for screening then the damage would have been less severe.

In June 2020 he stated that the cancer had spread to other organs of his body including the lungs, liver, and lymph nodes. However, he is still positive and hopeful about his condition since it hasn’t been declared chronic.

George Alagiah Salary and Net worth

He earns an approximate salary of $300K annually. He also has an estimated net worth of about $10 million.