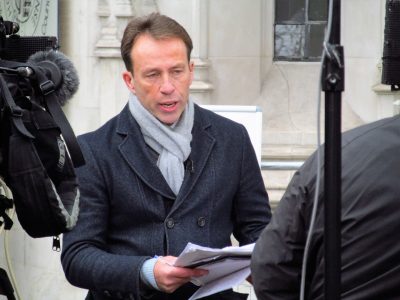 Ben Brown (Benjamin Russell Brown) is an author and a media personality serving as a relief presenter for BBC News at One. He is also the presenter of the 9 am-2 pm shift on Sundays, including BBC Weekend News on BBC One. Additionally, he presents on Monday and Tuesday from 4-7 pm.

He is a British national born and raised in Ashford, Kent, England.

Ben studied at Sutton Valence School, an independent school near Maidstone. He also participated in debate and was ranked second place in the national debating championships while in high school.

Additionally, he won an Open Scholarship to Keble College, Oxford. In Keble, he studied Philosophy, Politics, and Economics. He also graduated from the Cardiff School of Journalism, Media, and Cultural Studies with a diploma with distinction.

Brown has lived a private life for a longest time now and very little is known about his personal and early life. He was raised by his two parents. He is the son of Anthony Brown. His dad worked as a newscaster for ITN.

Little is known about his personal life but Ben is said to be a married man. Together with his wife, they are believed to have three children. However, their names are not known.

Brown began his journalism career in 1986 working for Independent Radio News. While there he covered major stories such as superpower summits to the Hungerford massacre. Two years later he joined BBC News as a foreign affairs correspondent. At BBC he covered stories including the fall of the Berlin Wall and the Gulf War. In 1991, he left for Moscow.

During his tenure as the Moscow correspondent, Ben witnessed the final collapse of Communism and the fall of Mikhail Gorbachev. He was also at the Russian Parliament when troops loyal to President Boris Yeltsin stormed it in 1993. In 1994, he was in Chechnya at the start of the civil war. His coverage of that conflict won him several international prizes.

In 1995, he became a foreign correspondent in London. In that position, he covered the break-up of Yugoslavia. He also reported from Bosnia-Herzegovina, Croatia, and Kosovo.

In 2003, Brown was embedded with British troops in the Iraq War. He wrote about his experiences in a book, The Battle for Iraq, notably how a British soldier saved his life by opening fire on an Iraqi militiaman who was just about to shoot him in the back with a rocket-propelled grenade. Ben covered the first Gulf War in 1991, and his account of that, All Necessary Means was also published.

In 2010 while he was interviewing Jody Mclyntre a student who had been dragged by the Metropolitan Police Officers during a protest he used an accusatory tone. He was criticized by viewers.

He also serves in the capacity of a relief presenter on BBC to date.

His work has received a lot of recognition even earning him awards including:

2. Recipient of the Golden Nymph Award.

3. He is the recipient of the  British Academy of Film and Television Arts Award.

4. In 2001, he received the Bayeux-Calvados Award for coverage of Intifada in Israel.

In May 2017, Ben found himself on the wrong side. This was after he was interrupted by a female passer-by while conducting a live interview on the street in Bradford. She walked into where the interview was taking place looked into the camera and said “Absolutely fantastic”.

However, Ben did not ask her to leave. Instead, he pushed her away and by accident, his hand touched her chest.

Viewers did not take the issue kindly. Ben apologized on his social media and stated that his action was not intentional. BBC also added that no further action would be taken as it was “clearly an accident”.

Ben Brown Salary and Net worth

He earns an approximate salary of $150,000 annually. He also has an estimated net worth of about $4 million.