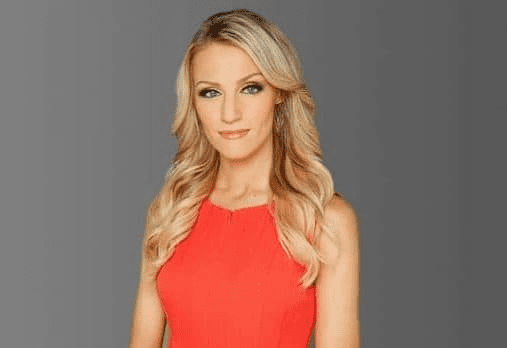 Carley Shimkus is a media personality serving as a 24/7 Headlines reporter for FOX News Channel. She also serves as co-host of FOX Nation’s Primetime Highlights (weekdays 7 AM/ET) alongside Rob Schmitt. Carley joined the network in 2012 as an associate producer for the FOX Business Network.

Shimkus is 5 feet and 10 inches tall.

She is an American citizen. She also belongs to the White ethnicity.

Carley graduated from West Morris Central High School in Chester, New Jersey in 2005. While there, she participated in modeling since she was 5′ 10″.

She later joined Quinnipiac University where she graduated in 2009 with a Bachelor of Arts in Broadcast Journalism. In her senior year, she interned at Fox News in Washington D.C.

In 2008, Shimkus was among the students selected to attend The George Washington University semester in the Washington Journalism Program.

Born and raised in Long Valley, New Jersey, Carley is the daughter of Zulma Aponte and Edward Shimkus. Her mother, Zulma was a flight attendant and she worked for United Airlines. She was also from Puerto Rico. While her father, Edward is a chemist of Lithuanian descent.

Her parents met on a flight in 1982 when her father was traveling.

Shimkus has an older sister, Margot. She is an art instructor in New York. She also graduated from the College of New Jersey where she studied Art Education.

Carley is married to Peter Buchignani. The couple tied the knot in 2015. However, they have been together since 2013.

Her husband works in Chicago for Amherst Pierpont Securities since March 2015. He works in “securitized products sales,” in the business development department.

Born on September 21, 1986, Buchignani is the son of Leo Buchignani and Mary Edna Buchignani. He graduated from Princeton University in 2009 with a Bachelor’s degree in Political Science. While there he played football for three seasons except for his senior year. He also earned All-Ivy honorable mention honors twice. During the 2007 season, he recorded 34 tackles and started all ten games.

Additionally, Peter has two siblings, an elder brother, and a younger sister.

Carley revealed she is expecting a baby boy with her husband Peter Buchignani in August 2022. The TV journalist shared the happy news live on FOX & Friends First this morning.

“My announcement is, that I’m pregnant!” Carley smiled and said on air.

“Still doesn’t feel real,” she said, adding that the baby is due in February 2023. The banner on the news program read: CARLEY IS PREGNANT!

“I’m gonna be a mom! I’m so excited about this. I’m so excited to see my husband Pete with the baby. He’s gonna be the best dad!…A lot of changes, but all good ones,” she said. Two boxes of blue frosted cupcakes were unwrapped and opened to reveal the sex of the baby boy.

Carley beamed live on-air while her co-stars showed off the cakes to viewers.

“I know that babies are born every second of the day,” she said, “…it is the most magical experience of my life.

“The first sonogram, when you hear the heartbeat, I cried. I couldn’t believe how emotional I got.”

The ultrasound was shown on the screen, the entire cast cooed, and Carley said, “I think he’s got a nice nose, but I’m biased.”

Shimkus serves as a 24/7 Headlines reporter for FOX News Channel (FNC). She joined the network in 2012 as an associate producer for the FOX Business Network (FBN).

In this role, she offers reports on various social media trends and entertainment news across the network’s programming, including FOX & Friends and MediaBuzz.