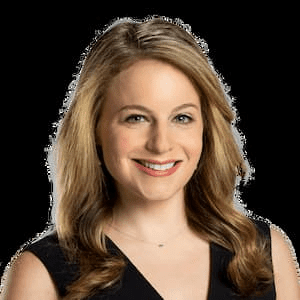 Goss was born and raised in the Bay Area. However, her age is unknown.

Emma grew up in Los Altos and attended Gideon Hausner Jewish Day School, Egan Junior High, and Kehillah Jewish High School graduating in 2011. She also graduated from Barnard College of Columbia University with a B.A. in American Studies and a minor in Art History in 2015.

Throughout college, Emma wrote and interned for a variety of news publications, and ultimately gravitated toward broadcast news.

Emma’s mom graduated from UC Berkeley’s first class of women’s studies majors. She educated Emma about Gloria Steinem when she was a kid, and named her Emma, to honor Emma Lazarus and Emma Goldman.

2020 wasn’t an easy year for her mom. First, she had her kidney removed. Then a couple of weeks later, a lobe of her lung was taken out. Her mom had two cancers, simultaneously inhabiting her kidney and lung. However, at the end of the year 2020, she was pronounced cancer free.

Goss is in a relationship. However, there isn’t much information about her partner.

Emma is a general assignment reporter at KTVU Fox 2 News covering all regions of the Bay Area. She has been with KTVU since December 2020. She covered the horrific gang shooting in Sacramento that killed six and wounded 12 in April 2022. Emma also reported on Elon Musk’s controversial offer to buy Twitter, as well as the local response from the East Bay’s large Afghan community the day the Taliban took back control of Kabul. In addition, Emma covered the ongoing Bay Area efforts to support Ukraine amid the war with Russia. She also covered the protests and efforts by Mills College alumnae to “save” Oakland’s historic women’s college from a merger.

Emma worked in production for NBC Nightly News with Lester Holt, The Today Show, and MSNBC, where she began specializing in business and technology journalism, covering national stories that occasionally brought her back home to Silicon Valley. Those years at the network prepared her to transition into on-air reporting in 2018, spending two years in Bakersfield, before moving back to the Bay Area.

She loves living close to her family and exploring as many hiking, biking, and running routes as she can find. She also enjoys writing for J. The Jewish News of Northern California, and is a member of the Junior League of Palo Alto Mid-Peninsula where she volunteers to support local women and children’s arts and education initiatives.