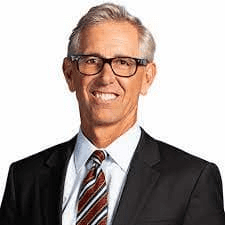 Bill Martin is a media personality serving as a certified broadcast Chief Metrologist at KTVU-TVin Francisco, California. He joined the station in 1993. Previously, he was the weekend meteorologist at KTVU.

He was born and raised in Buffalo, New York, in the United States of America. However, he has not disclosed the date, month, or year he was born.

Martin is tall in stature but his height is undisclosed.

Bill attended Paradise High School and graduated from the University of California Berkeley with a degree in Physical Geography in 1981. He earned a graduate degree in Atmospheric Science from San Francisco State in 1987. While at the university, he spent many hours surfing the California coast from Oregon to Mexico and became passionate about forecasting waves and weather.

He was born in Buffalo, New York, the United States of America. His dad was a veterinary and he moved his family up to the hills to hunt and fish, so Martin was outside all the time. ” when I was about 8, I watched the weather guy on KCRA and I thought, I want to do that. It was and the outdoors and I love to watch the guy use Technology. ” he said.

Martin says that he is very proud that his ancestors were some of the earliest settlers in San Francisco. His great Uncle Joe was the Sherriff of Vacaville in the late 1800s. Joe was known as the Sampson of Vacaville because of his 6-feet 4 inches frame and his willingness to get into scraps.

Martin is a married man. He met his wife Pam while he was working at KFTY. By then, Pam was selling ads for the station. They have their marriage ceremony in the year 1993. The duo is blessed with two children, Bill and Avery.

Bill started working at KTVU as the weekend meteorologist in 1992. He covered the Oakland Hills fires, the earthquake in 1989, the San Bruno gas fire, the Japanese tsunami, the Camp Fire in Paradise where he lost the house he grew up in, the Oroville Dam evacuations, and numerous local flooding.