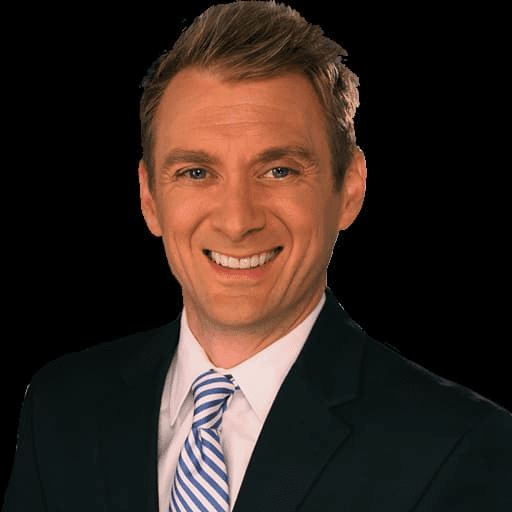 David Martin is a TV Host, News Reporter, and Producer at Fox Television. He is also a 4-time EMMY™ Winning Features Host on FOX Orlando. He helped launch FOX 35 News in 1997 as well as a nationally, syndicated segment called “The News Remixed with David Martin” to the owned and operated FOX affiliates.

Martin is of American nationality.

After completing his high school education, Martin joined the University of Pennsylvania in Philadelphia in 1991 where he earned a Communications degree with a concentration in Marketing at the Wharton School of Business in 1995.

David grew up in a happy and active family. Despite his father’s tight schedule, he ensured he created time to take his family skiing.

“My dad worked hard in a tough financial position, but he made time to take us skiing literally every weekend on a little hill in Ohio, and if it wasn’t ski season, we would golf or ride roller coasters. He and my mom always embodied the “The family that plays together stays together” motto. Now, we play together as three generations, which is spectacular. To this day, my dad rides coasters with our family and he’s a blast,” David says.

His father is also an avid reader and a life-long learner. He has been a natural teacher and he volunteers in the public school system as a reading tutor.

David is married to his wife, Nina. The couple tied the knot in September 1999 and they are parents to an 11-year-old son and an 8-year-old daughter. The family resides in Orlando.

The family is a bunch of talented individuals. David is a trained percussionist and keyboardist, and his kids and wife are all musicians. They also love skiing. David has been an avid downhill snow skier since age 2.

“I’m a trained percussionist and keyboardist, and my kids and wife are all musicians; so we play drums, keyboards, and guitars together and just ham it up at home making music (noise),” David says.

” Also, I’ve been an avid downhill snow skier since age 2 and, thankfully, my wife and kids love skiing as much as I do. Every year, we spend a week together in the Rockies with my parents, who also ski incredibly well even in their 70s. Beyond that, we are all extreme theme park fanatics! Around the house, we love to bike and play board games,” he adds.

Martin is a TV Host, News Reporter, and Producer at FOX Television. He joined FOX TV in December 1997. He also helped launch FOX 35 News in 1997. In addition, Martin launched a nationally, syndicated segment called “The News Remixed with David Martin” to the owned and operated FOX affiliates.

Martin is also the 4-time EMMY™ Winning Features Host on FOX Orlando. He files reports out of the Special Projects Unit. His stories go beyond traditional daily news coverage and into territory that will make you think.

He began his on-air career as a reporter and anchor for CNN’s Local Headline News in Central New Jersey. He then became a bureau chief and weather anchor for the FOX affiliate, WWCP, in Altoona-Johnstown-State College, Pennsylvania.

Before his career in television, Martin worked as a management consultant for Price Waterhouse in Moscow, Russia. He spends time outside work composing and arranging music in his studio. When he can sneak away from the sub-tropics, you’ll find him skiing at the resorts of Northern Utah.