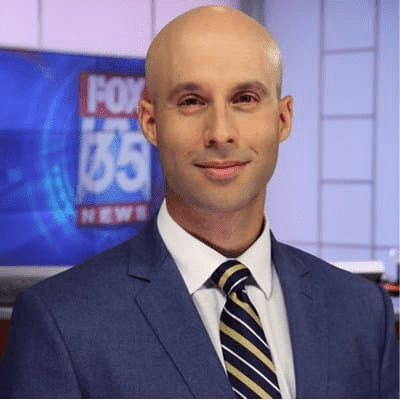 Matt Trezza is a media personality serving as a reporter for FOX 35 News in Orlando. Previously, he was a reporter and news anchor in Wyoming, northwest Ohio. He was also based overseas, covering international news in Europe and Asia.

Matt holds a Bachelor of Arts in International Studies from Johns Hopkins and a Master of Science in Journalism from Columbia. While in college, he held internships at CBS News, CSPAN, Bloomberg News, and the United States Congress.

He is a native of New York but there is no information about his family background, parents’ identities, and Siblings.

Matt is married. However, his wife’s name is unknown. The couple has two kids, a daughter, Maya, and a son, Daniel.

Matt is a reporter for FOX 35 News in Orlando. From business to beaches, and from policy to pets, he loves the hustle and variety of news in central Florida.

A New York native, Matt comes to FOX35 after reporting and anchoring news broadcasts in Wyoming, northwest Ohio, and for several years based overseas, covering international news in Europe and Asia. He also staffed several political campaigns, prior to launching his news career.

Outside of work, he enjoys spending time with family, keeping fit, writing, and traveling.