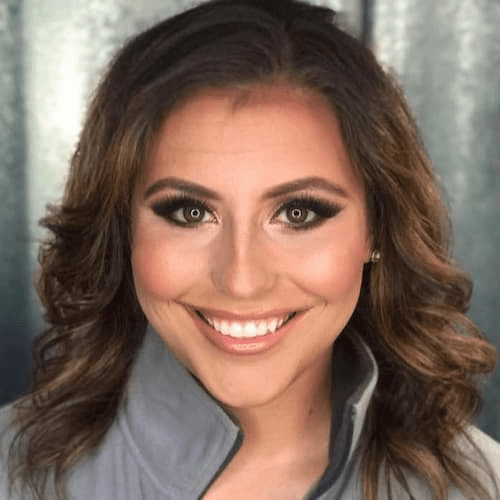 Courtney Spinelli is a media personality serving as a reporter for FOX59. She joined the FOX59 news team in October 2020. Previously, she was an investigative reporter and weekend evening anchor at KWQC-TV in Davenport, Iowa.

She is 33 years old. She was born and raised north of Boston.

Spinelli is American by nationality. She also belongs to a white ethnicity.

She attended Tewksbury Memorial High School from 2008-2012. She also graduated from Worcester State University, where she earned her Bachelor of Arts degree in Communication with a concentration in Broadcast Journalism.

On January 24, 2018, Courtney posted a picture of her and her dad on Twitter with a caption, “My dad has sacrificed so much — financially and otherwise — to put me and my siblings through school, support our ambitions, & more (it would take me years to write it all out). His ultimate dream (says it every yr) is to see the Pats play in the SB!!”

She was raised north of Boston alongside her siblings. On August 8, 2021 she posted a picture of her and her sister on Instagr am.

My dad has sacrificed so much — financially and otherwise — to put me and my siblings through school, support our ambitions, & more (it would take me years to write it all out). His ultimate dream (says it every yr) is to see the Pats play in the SB!! @Gillette #HisBigDayContest pic.twitter.com/mOX7hn9Mfr

Spinelli isn’t married. However she has managed to keep her personal life away from the limelight. It is therefore not known whether she is single or in a relationship.

Spinelli is a reporter at FOX59. She joined the FOX59 news team in October 2020. She began her career working for several years as an assignment editor in the Boston area at WFXT-TV.

Alongside a talented team of journalists, Courtney had the privilege of helping cover many important yet challenging stories. In her assignment editor role, she earned an Emmy nomination in 2017 for her contribution to an investigative report on ambulance and staffing shortages in Boston’s EMS division. The report revealed that patients were forced to share ambulance rides with strangers on their way to the hospital.

In 2019, she joined the team at the NBC affiliate station in Davenport, Iowa, where she was an investigative reporter and weekend evening anchor. She covered several notable stories, including the investigation into the disappearance of a 10-year-old girl by local and federal authorities, now a murder investigation; the trial of a 13-year-old boy who brought a gun to school and pointed it at teachers; and historic flooding of downtown Davenport after a flood barrier protecting the city against the waters of the rising Mississippi River failed. She was also part of the team that earned an Edward R. Murrow award for Overall Excellence.

Included in the entry was her coverage of civil unrest following the death of George Floyd, the disappearance of 10-year-old Breasia Terrell, and her series on gun crimes that transcended borders across the Quad Cities. She also placed in the 2020 Iowa Broadcast News Awards Large Market TV category on In-Depth/Series reporting for her continuing coverage on litigation following a fire and explosion at a food processing plant that killed a firefighter and injured another.

Spinelli is thrilled to be a part of the talented teams of FOX59 and CBS4 to continue her reporting in the Midwest. When she’s not working, she enjoys exploring the city, working out at CrossFit and watching football.