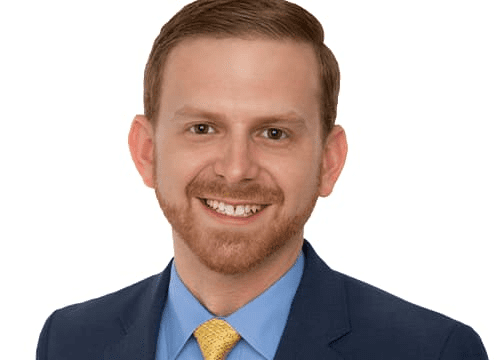 Corey Simma is a media personality serving as a First Alert Meteorologist for Action News Jax. He joined the First Alert weather team in December 2017 and anchors the Saturday and Sunday morning newscasts on CBS47 and FOX30.

Simma graduated from the University of Oklahoma with a Bachelor of Science in Meteorology with a Minor in Mathematics in 2014.

While at the University of Oklahoma, Simma worked on various research projects with mobile Doppler radars – including cloud chemistry, tornadoes, hurricanes, and even lightning. He spent three summers in Starke and Gainesville providing radar coverage for the University of Florida engineers conducting rocket launches to induce lightning strikes.

He was born and raised in Oklahoma. However, there is no information about his parents. He hasn’t also disclosed whether he has siblings or not.

Corey is married to his lovely wife, Lacey Lee. The couple tied the knot on January 21, 2021. Lacey celebrates her birthday on April 4th every year.

Corey is a First Alert Meteorologist for Action News Jax. He joined the First Alert weather team in December of 2017 and anchors the Saturday and Sunday morning newscasts on CBS47 and FOX30. He is also a Certified Broadcast Meteorologist (CBM) from the American Meteorological Society.

Born and raised in Oklahoma, Corey’s love for the weather began at a very young age. Storms and big events piqued his interest, which grew into a love and respect during college.

Corey began his on-air career in 2014 in Amarillo, TX at the NBC affiliate. He is thrilled to be in Jacksonville covering the weather in Northeast Florida and Southeast Georgia.

When he’s not at the station, you’ll find Corey playing video games, listening to music and playing music, watching college football or the OKC Thunder, or boogie boarding at the beach.