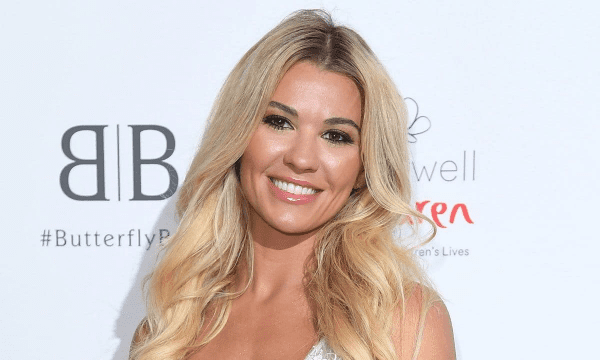 Christine McGuinness is a Former Miss Liverpool and currently taking part alongside other celebs in ITV’s The Games. She is also the former Real Housewives of Cheshire star.

The 34-year-old started her life in the Lancashire seaside resort of Blackpool.

Details of her stature are yet to be established.

She hasn’t shared any data in regard to her educational background.

Information about her family background, her parents’ identities, and her siblings have not been disclosed.

She has been married to her husband Paddy (48years old) for 11 years. The pair met while Christine was doing a fashion show for Cricket at a Liverpool Tennis Tournament. The loved-up couple has three children together. Christine revealed that her husband Paddy, who is a comic and presenter has been taking care of the children who, like her, have been diagnosed with autism.

Her children are; eight-year-old twins Penelope and Leo and six-year-old Felicity.

She said: “I’ve never done more than three days away from my children before.”

Life hasn’t always been glamourous for the model who has appeared in The Real Housewives of Cheshire.

More recently, Christine discovered she was autistic, as are all three of her children. She appeared in the BBC documentary Our Family and Autism, which followed her and Paddy over many months as they learn more about the condition.

The couple also met other parents, experts, and people on the autism spectrum, including footballer Paul Scholes, who has a 16-year-old non-verbal autistic son.

Just months after learning she had autism, Christine was diagnosed with attention deficit hyperactivity disorder, better known as ADHD. The condition includes symptoms such as being restless and having trouble concentrating.

The model told the Manchester Evening News in November that her diagnosis came as ‘such a huge relief.’ She said: “When I got the diagnosis, I can honestly say it was such a huge relief. Just to know there w as a reason why I felt this way and why I struggled with certain things. It’s really helped me, my husband to understand autism a lot more, it’s helped me when it comes to working, and in everyday life.”

She also developed anorexia at the age of eight, spending secondary school without eating a proper meal. Christine was also sexually assaulted as a teenager.

Speaking in an emotional clip from the first episode, the influencer can be seen leaving the track in tears as she takes some time to come to terms with the daunting task at hand.
Confiding in one of the show’s production team, Christine explains how she feared she may not be able to compete on the show due to a fear of large crowds, triggered by her autism.

She is among 12 familiar faces going head-to-head in a range of sporting challenges, across a week of live shows amidst fierce competition. The former Real Housewives of Cheshire star ( just before Christmas, where she opened up about her autism diagnosis) will battle it out against other female celebs like Emmerdale’s Rebecca Sarker and Love Island’s Olivia Attwood in live events in front of crowds of fans and millions of viewers at home.

The Games originally started life on Channel 4 back in 2003, running for four series and seeing stars like Kirsty Gallacher, Phillip Olivier, Javine and Jade Jones emerge victorious, as Jamie Theakston and Jayne Middlemiss hosted. And now it’s back as ITV picks up the baton and a new line-up of The Games contestants prepare to do battle across a host of different disciplines from sprinting to diving and weight lifting to cycling. The Games continue on ITV and ITV Hub. The program sees celebrities compete in a series of athletic events after undergoing 12 weeks of grueling training.

The wife of comic Paddy McGuinness is no stranger to the spotlight. She began her career as a teenager when she won beauty pageants and went on to be crowned Miss Commonwealth at just 19-years-old.

She released a new book, A Beautiful Nightmare, where she shares some of her “untold stories”, including her harrowing upbringing and recent diagnosis with autism.

Her net worth is under review and shall be updated.