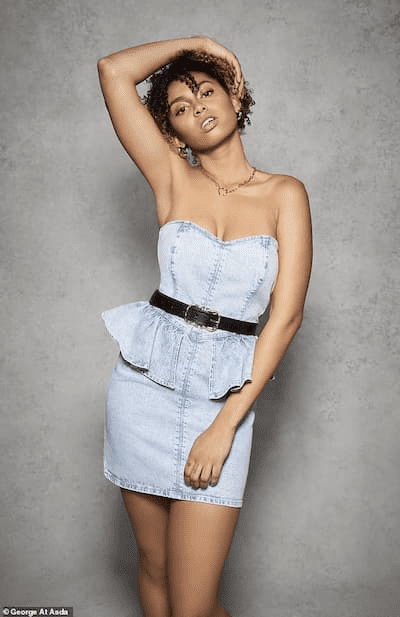 Phoenix Brown is an influencer and model competing in ITV’s The Games. She also works with the charity Women’s Aid. Additionally, she launched her own t-shirt design as part of the It’s Not Our Fault campaign.

Phoenix is the daughter of Scary Spice Mel B and Dutch dancer Jimmy Gulzar. The couple met when Jimmy was a dancer for the Spice Girls and got married in 1998. However, in 2000 the pair divorced.

As a young girl, Phoenix lived through a decade of her mother’s abusive relationship with her stepdad, Stephen Belafonte.

After breaking away from the marriage and writing a book, Brutally Honest, about her experiences (Phoenix wrote one chapter), Mel has become an advocate for survivors of domestic abuse. Recently, as Patron of Women’s Aid, she received an MBE for her ser­vices to other sufferers.

“I’m so proud of her,’ says Phoenix. “She’s turned her life around. It hasn’t been easy but she’s standing up for others in abusive situations.”

This is hugely important to her. ‘Until the age of nine my life was like a perfect kids’ movie,’ she says. ‘I lived in LA with my mom [having spent most of her life there she says ‘mum’ the American way], all the British family would come over and we had so many friends.’

Then in 2006, after her mother had been dating film star Eddie Murphy for nine months, he dumped her publicly when she was pregnant and a horrendous paternity battle followed. Enter film producer Stephen Bela­fonte, who has a criminal record including a 2003 conviction for domestic violence.

“My world went from technicolor to black and white,’ says Phoenix.

“I had to stay in my room with the door shut. I wasn’t allowed to go in the fridge but I had 30 minutes to make my packed lunch for school.

“Often in the morning he’d pull it out and eat my sandwiches, laugh at me and tell me to get to school.

“He’d tell me I was ugly and retarded all the time. I had this beautiful Labrador called Lordy who we’d had since I was born. I loved him.

“Stephen picked him up one day and threw him across the garden into the pool – Lordy was old, he was terrified. I couldn’t speak. A few weeks later I came back from school and Stephen told me he’d had him put down.”

She has two younger sisters, Angel and Madison.

Brown isn’t married. She has also kept her personal life away from the limelight. Therefore, she hasn’t revealed whether she has a boyfriend or not.

Phoenix is a contestant on ITV’s The Games. She joined the sports show in 2022 and it debuted on Monday 9th May at 9 pm on ITV. The series, which is recorded live, will air nightly across the week until Friday 13th May, with one man and one woman emerging as 2022’s victors.

In 2021, Phoenix was unveiled as the face of Asda supermarket’s George G21 range. She also appeared in Channel 4’s Born Famous to see what life could have been like for her had her mum not made it big in 2019. In addition, she works with the charity Women’s Aid, visiting schools and colleges as an ambassador. The influencer also launched her own t-shirt design as part of the It’s Not Our Fault campaign.

Young Phoenix also appeared in the music video for her mum’s song Lullaby, which was filmed in Morocco, in 2001. She was also on the cover of the single, pictured hugging her mum.

On May 11, 2022, two contestants of The Games, Phoenix and Chelcee Grimes came to blows behind the scenes after a disagreement over placements in a breaststroke race. Phoenix accused Chelcee of giving her a “shove” and not playing “fair” during the hurdles on the new ITV show and asserted her claim to third place in the breaststroke ahead of her.

In the clip, Phoenix told the camera following her after the tight finish in the breaststroke: “So they’re saying they want to re-check it because they are saying Chelcee came third and I didn’t. That’s bull crap! I busted my ass on that.”

The footage seemed to indicate Chelcee had marginally pipped Phoenix for third place in the 50m breaststroke. However, a review of the result took place after the race, and the technical analysis and independent judge both confirmed that Phoenix was in third place and Chelsee came forth.

In another clip, Phoenix raised the close finish between her and Chelcee for first and second place in the 100-meter hurdles event, which was shown on Monday night’s opening show of the Games, with Chelcee winning by a whisker. Standing among a group of fellow contestants, presenters, and production staff, Phoenix, gesturing to Chelcee, said: “She pushed me yesterday.”

Chelcee replied: “I love the girl, but I’m not getting robbed like that.” Phoenix said: “I played fair, you didn’t play fair yesterday, man.”

Yet another clip showed the contestants on a coach. Chelcee said: “You know what I love Phoenix to death and I love sports. But I don’t like sports like that. Apparently, I didn’t touch the touchpad.”

Watching a replay of the race on her phone, Chelcee said: “I’m touching the wall, clearly! Phoenix, I love you girl. But, you’ve got to beat me fair and square.”

Her net worth ranges from $1 million to $5 million.