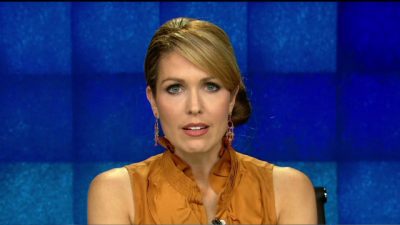 Christi Paul is an author, singer and a media personality serving as a weekday news anchor for HLN and weekend anchor for CNN’s New Day. She was also Miss Mansfield (Ohio); Miss Greater Cleveland, 1991–92; and third runner up to Miss Ohio, 1993.

She is 5 feet and 5 inches tall and weighs 54kgs. She also has a slim physique, green eyes and blonde hair. Her body measurements are as follows 33-22-33 inches (Burst-Waist-Hips).

Paul is an American citizen.

She attended Bellevue High School. After completing her high school education, she joined the University of Toledo from which she graduated with a Bachelor of Arts degree in Broadcast Journalism.

Additionally, the Department of Communications named her an “Outstanding Alumna” and awarded her an honorary doctorate degree when she gave the commencement address at the University in 2015.

Born and raised in Bellevue, Ohio, Christi is the daughter of Rojan Donald Paul and Ann Elizabeth. However, she has not revealed whether she has siblings or not.

Paul is married to Peter Wurm. They tied the knot in 2003. Previously, she was married to Rob Koebel, a reporter and a news anchor. They met in West Virginia when she was working at WDTW. The couple later moved to Boise and Phoenix.

Rob and Christi divorced in 1995. Her book, Love Isn’t Supposed to Hurt is a memoir of her marriage and the abuse she received from her ex-husband, Koebel (named “Justin” in the book).

Paul and her husband Peter have three children.

She covered the 2016 presidential election, President Obama’s second Inauguration in Washington, DC, the Orlando Pulse nightclub shooting as well as the school shootings in Newtown, CT, and at Virginia Tech. She has also extensively reported on Hurricane Sandy, several presidential elections, and secured an exclusive interview with Vice President Joe Biden, talking about his motivation to combat domestic violence as well as addressing the issues with Obamacare.

In addition, Paul serves on the National Advisory Council for the One Love Foundation in honor of Yeardley Love, the University of Virginia Lacrosse player beaten to death by her boyfriend, and is also involved with Girl Talk Inc., an organization where high school girls mentor middle school girls to help build self esteem and combat bullying. Christi also volunteers as a “Baby Buddy” every week holding babies in the NICU at Children’s Healthcare of Atlanta.

Tired of simply having to tell viewers news stories about children who are missing, Christi took action to help, founding “Find Our Children,” a partnership with The National Center for Missing and Exploited Children in Washington, DC. In 2012 NCMEC honored Christi with their prestigious Hope Award, an award she shares with past winners such as former Secretary of State Colin Powell, then-Senator Joe Biden and actor Ben Affleck.

Prior to joining HLN in 2003, Christi was an anchor, consumer reporter and weathercaster in Phoenix. First at KNXV, then at CNN affiliate KTVK. Before moving to Phoenix, she was an anchor/reporter for KTVB in Boise, ID where the Idaho Press Club honored her for her series of stories about Julianne Prudhomme, a 4-year old girl who underwent a 5-organ transplant. Christi began her career as a one-man band (anchor/reporter/photographer) in Clarksburg, WV at WDTV.

She is an author of the book, Love Isn’t Supposed to Hurt, published in 2012. The book is about her journey in overcoming verbal and emotional abuse. It hit Amazon’s top 20.

Paul has recorded two songs, Wake Up In It and Free. The songs were recorded in Nashville and they coincide with her book, Love Isn’t Supposed to Hurt. They can both be found on iTunes.

Christi Paul Salary and Net worth

Christi earns an average salary of $90k annually. She also has an estimated net worth of $5 million.