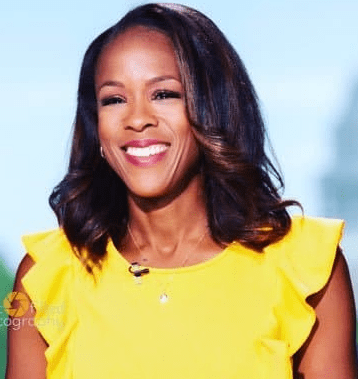 Brie Jackson is a media personality serving as NBC News Channel Washington Correspondent. She joined the team in December 2021. Previously, she worked as a national correspondent for the Hearst.

Jackson was born in 1981 in Silver Spring, United States making her 42 years old as of 2022. However, her birthday is unknown.

Jackson graduated from the University of Maryland with a Bachelor’s degree in Communication in 2003. As an undergraduate, she served as a team captain for the Maryland women’s basketball team.

While Jackson was at the University of Maryland pursuing her Master’s degree, she produced a documentary exploring the impact issues such as poverty and cultural conditioning have on younger generations.

Brie was born in the United States. Her mother, Patricia Jones-Jackson died on June 29, 1986, and she is the author of “When Roots Die”, a book examining the Gullah culture along the Sea Islands. Her aunt Joycelyn Elders was the first African-American appointed U.S. Surgeon General.

Brie’s dad has always been supportive of her daughter’s career. Recently, he wrote a note encouraging her for the work well done.

Note from Dad on my story tonight in London 👀 pic.twitter.com/JHcYPK2Myf

She also has a sister, however, there isn’t much information about her.

Jackson is married to Jen. The couple tied the knot on November 22, 2022.  They met on @Match nearly 7 years ago and talked over the phone for 3 months before finally meeting in person. Since then, they’ve been by each other’s side through good times and challenges.

Prior to her wedding, Jackson had dated women for years. However, it wasn’t easy for her to come out to her dad.

“I’ve done a lot of difficult things in my life including qualifying for the Boston Marathon, going through the academic rigors of graduate school, and coping with the loss of a loved one. But one of the hardest things that I avoided doing for many years was to come out to my dad,” she said.

Then one day, years ago, while out for lunch she decided to open up to her dad about being a lesbian.

“It was a difficult conversation but dad’s support made it a hell of a lot easier,” she recalls.

Jen and I met on @Match nearly 7 years ago & talked over the phone for 3 months before finally meeting in person. Since then, we’ve been by each other’s side through good times and challenges. We’re a team. Whatever I lack she has my back and vice versa.

Jackson is an award-winning NBC News Channel Washington Correspondent who joined Washington, D.C., Newsroom in May 2017. She covers state Congressional delegation and the Federal government stories.

Before joining the team in the nation’s capital, Jackson served as a weekend anchor and reporter in Roanoke, Virginia, reporting on government, politics, and breaking news stories.

Previously, Jackson worked in South Carolina where she won awards for investigative reporting and feature reporting. While there, she served as a panelist for Congressional District debates and covered the 2012 Republican Party presidential debates. Jackson also worked as a general assignment reporter for WBOC-TV in Salisbury, Maryland, and a video editor at WJLA-TV in Washington, D.C.

Jackson is an avid runner who enjoys participating in marathons to raise money for charity. She volunteers for organizations including the Boys & Girls Clubs.