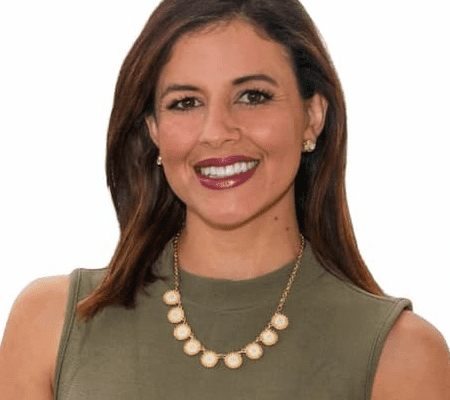 Alexandra Limon is an American media personality serving as a Washington Correspondent for Nexstar Media Group. She joined the Washington D.C. Bureau in August 2017. Previously, she was a news reporter for FOX 5 DC.

Limon grew up in sunny southern California and joined California State University, Fullerton where she graduated with a degree in Communications.

Limon was born to her parents and grew up in sunny southern California. However, she hasn’t shared her parent’s identities with the public. It is also not known whether she has siblings or not.

Alexandra is married to her husband Johnny. The couple has known each other for 20 years. They are also the proud parents of a son named Lincoln, who was born in D.C.

They love spending their spare time hiking, swimming, traveling, and eating food from around the world, as well as spending time with their dog Cooper and cats Sam and Midori.

Alex is a Washington Correspondent for Nexstar Media Group. She joined the Washington D.C. Bureau in August 2017 and focuses on covering Congress, the White House, the Supreme Court, and other government agencies.

She began covering local news in Washington, D.C., in 2014. Before D.C., she worked as a news reporter all around the west, reporting in both English and Spanish at TV stations in Reno, Fresno, Seattle, and Los Angeles. She also reported for the Telemundo network from the U.S.-Mexico border in Arizona on issues like immigration and drug trafficking.

Alex grew up in sunny southern California and graduated from California State University, Fullerton. During her free time, she loves spending time with her family hiking, swimming, traveling, and eating food from around the world.