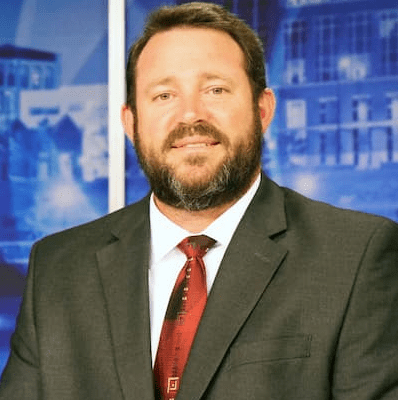 Brian Thomas is a media personality serving as a Weather Forecaster at WRBL News 3. He is also a PA Announcer for the Columbus Chatt-A-Hoots and the Central Red Devils and an Afternoon Personality at Kissin’ 99.3.

In August 2022, Thomas also earned a degree in Atmospheric Sciences and Meteorology from Mississippi State University.

Thomas married his high school sweetheart and together they have two children, a 19-year-old daughter, and an 8-year-old son. They also have a golden retriever named Brinkley (from his and his wife’s favorite movie, “You’ve Got Mail”).

Brian is a Weather Forecaster at WRBL News 3. After graduating from Columbus High School, he spent several years serving in the US Navy. After the military, he came home and went to Columbus College, yes now CSU, and graduated with a degree in Criminal Justice.

During his Junior year in school, Brian was hired as a remote setup person at Kissin’ 99.3 in 1996, and thought that was so cool! Fast forward to the present, and he’s been on the air in Columbus for almost 24 years!

In August 2020, Brian went back to school to study Meteorology through long-distance learning at Mississippi State. Shortly after, he started working at WRBL News 3 as a fill-in Meteorologist.