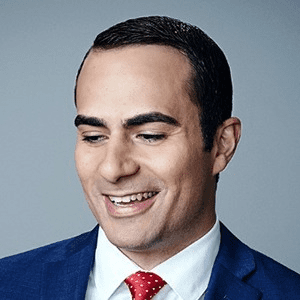 Boris Sanchez is a media personality serving as an anchor on CNN’s New Day Weekend. He joined the show in April 2021. Previously he was a CNN White House correspondent covering President Trump and his administration.

He is tall in stature. He stands at 6 feet tall.

Sanchez is highly educated. He graduated from Miami Lakes Educational Center and Technical College in 2004. In 2006, he also graduated from Miami Dade College with an A.A. in Journalism. In addition, he received Bachelor’s degrees in Broadcast Journalism and International Relations from Syracuse University in 2009.  While completing his degrees, he interned at Miami NBC affiliate WTVJ.

Boris is the son of Jose and Puchita Sanchez. He was born in Havana, Cuba before his parents moved to Miami, Florida. However, there isn’t much information about his father even though Boris usually posts about his mother on his social media pages.

Sanchez wasn’t an only child. He was raised alongside his sister, Leslie. On November 10, 2017, during Leslie’s birthday, he wished her a happy birthday through a tweet.

Sanchez is a handsome and successful young man. Hence, everyone is interested in knowing his marital status. He is married to Jennifer Piekut.  The couple tied the knot on September 17, 2016, in Truckee, California. However, as of November 2022, they have not been blessed with kids.

Sanchez is a CNN anchor based in Washington, DC. Prior to joining “New Day Weekend” as co-anchor in April 2021, he was a CNN White House correspondent covering President Trump and his administration, including major policy decisions, visits by world leaders, and key staff departures. Sanchez has broken news on the Trump Administration’s immigration policy, its pressure campaign on Nicolas Maduro’s regime in Venezuela, and dealings between Trump associates and Russian nationals before the 2016 election. He has also traveled internationally to cover President Trump’s visit to Japan in May 2019 and the 2017 G-7 Conference in Quebec, Canada.

After joining CNN in June 2015, Sanchez served as a national correspondent based in New York, relocating to his hometown of Miami a year later. As a national correspondent, he covered numerous breaking news events, including being one of the first reporters on the scene at both the Fort Lauderdale Airport shooting (2017) and the Orlando Pulse Nightclub massacre (2016). During 2016, he also covered several historic natural disasters, including tragic flooding in Louisiana, Hurricane Matthew in northern Florida, and a devastating earthquake in Ecuador.

Prior to joining CNN, Boris anchored the 10 p.m. newscast at FOX 31 Denver, also contributing coverage across all the stations’ programs since 2012. He also anchored breaking news coverage of the Arapahoe High School shooting (2013), the Black Forest Fire (2013), and the devastation caused by the historic floods of September 2013. Additionally, he broke a series of stories on the implementation of Amendment 64, which legalized the recreational use of marijuana in Colorado. He began his career as a weekend anchor at KRCR in Redding, California.

Sanchez’s reporting hasn’t gone unnoticed. He has received various awards such as; his reporting during violent unrest and riots following the shooting of an African-American man by police in Charlotte, N.C. (2016), helped CNN win an Edward R. Murrow Award for breaking news coverage. His work also culminated with a 2015 Heartland Regional Emmy award.

What is Boris Sanchez ethnic background?

Where is CNN anchor Boris Sanchez from?

Sanchez was born in Havana, Cuba. However, his hometown is Miami, Florida.

His net worth is estimated to be $2 million.