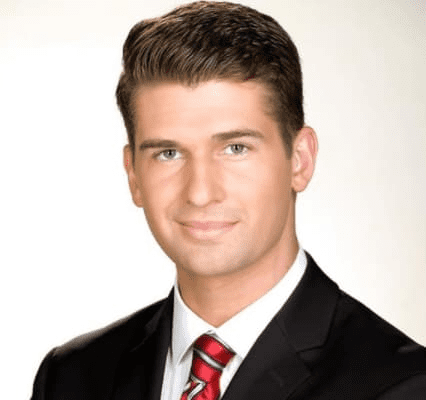 Bill Melugin is an American media personality serving as a National Correspondent for Fox News Channel based in Los Angeles. He is a 4-time EMMY winner, 3-time Edward R. Murrow winner, and 4-time RTNA Golden Mike winner. Previously, he was an Investigative Reporter for KTTV-TV FOX 11 Los Angeles.

He is tall in stature. He stands at 5 feet 7 inches tall.

Melugin has attained some level of education. He graduated from the Walter Cronkite School of Journalism and Mass Communication at Arizona State University with a Bachelor of Arts degree in Broadcast Journalism in 2012. He also minored in Spanish linguistics from the same Institution and can speak the language conversationally.

Bill was born in Orange County, California, United States. From childhood, his parents raised him. However, on May 12, 2016, Bill lost his dad to a sudden pulmonary embolism while he was at work. Despite the trauma and sadness caused by his father’s death, he still keeps the memories they shared. Every year he celebrates his birthday. He also shares a close bond with his mother.

On May 9, 2021, he celebrated his mother by posting a tweet captioned, “Happy #mothersday to the best mom a son could ever ask for! My best friend, my biggest fan, and a bright light in my life! I love the buzz I feel in my pocket after every single live shot, knowing it’s her either texting good job, fix your tie, or you have powder on your face. Love you, mom.”

In addition, Bill has a brother. However, there isn’t much information about him.

As of 2022, Bill isn’t married. He is in a relationship with Katy Johnson. The couple started dating in 2018.

Katy is an American model, advocate, travel blogger, and founder of One Model Mission, a mission around the world “to find beauty for a purpose”. She travels the world with the aim of empowering women.

On November 12, 2019, during their first anniversary, Bill posted on Twitter, “Today marks one year since this gorgeous girl walked into my life & changed it for the better! @iamkatyjohnson is currently in the Middle East in country number 75 working on her incredible documentary, and even though I think she’s insane for going to some of the places she does, I’m so proud of her for getting out of her comfort zone and following her passion! I’m so incredibly grateful for how supportive she is of my career, and how she’s able to keep my stubbornness in check and calls me out like nobody else! Looking forward to what’s ahead, hurry home so we can celebrate! Love ya!”

Melugin serves as a national correspondent for FOX News Channel (FNC) based out of the Los Angeles bureau. He joined the network in May 2021. Recently, Melugin has been reporting from the Rio Grande documenting the increased number of migrants crossing the southern border.

Prior to joining FNC, Melugin served as an investigative reporter for KTTV-TV Los Angeles. In this capacity, he helped break a number of stories including the news of California Governor Gavin Newsom failing to adhere to COVID-19 guidelines while eating at the French Laundry restaurant. While at KTTV, his breaking news coverage was also featured across FNC programming, including Tucker Carlson Tonight, The Ingraham Angle, and The Story. Prior to joining FNC, Melugin worked as an anchor and investigative reporter at WJYZ-TV in Charlotte, North Carolina, and as a fill-in anchor at KFOX-TV in El Paso, Texas.

During his career as a journalist, Bill has won the following awards:

Melugin modeled for a number of agencies including; FORD/Robert Black Agency, Wilhelmina Models, and URBAN Management.