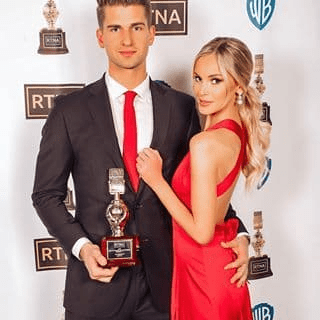 Katy Johnson is an American model, advocate, travel blogger, and founder of One Model Mission, a mission around the world “to find beauty for a purpose”. She is also the partner of Bill Melugin, a national correspondent for FOX News Channel (FNC) based out of the Los Angeles bureau.

Johnson obtained an Associate’s Degree in Criminology from Des Moines Area Community College in 2007. However, through high school and college, she took history classes and fell in love with every bit of them.

Katy grew up with her family in a small town in Iowa. Her upbringing wasn’t exactly ideal or easy at that; she lived with her mother and stepfather as her parents were divorced and her dad was a recovering alcoholic.

As a teenager, she struggled with depression and anorexia and was hospitalized for 2 months leading up to her 16th birthday.

Katy still struggles with her body image and eating disorder history occasionally; being in the entertainment industry in Hollywood has not been the easiest given her past, but each day she focuses her energy on self-love, self-improvement, and being the best person she can be.

Johnson is in a relationship with Bill Melugin. Melugin is a multi-award-winning media personality serving as a national correspondent for FOX News Channel (FNC) based out of the Los Angeles bureau. He joined the network in May 2021. Recently, Melugin has been reporting from the Rio Grande documenting the increased number of migrants crossing the southern border.

The duo started dating in 2018. On November 12, 2019, during their first anniversary, she posted on Instagram; “I just want to take a pause in my travels to acknowledge my intelligent, humble, loving, protective, handsome, and generous boyfriend. bmelugin33.

“Happy one-year anniversary baby. Thanks for putting up with my bratty self sometimes and seeing the best in me beyond my flaws. Thanks for knowing how truly weird I am and laughing with me while adoring me! Thank you for going on adventures with me, and then supporting me when I go on adventures alone. (Most times ?) Thanks for everything you do for me. (It’s a lot)

“Cheers to many more years of memories and me slowly turning you into a softy! ??☺️?❤️ I’m sorry I’m not there today but I’ll be home before you know it! Take this time to enjoy Wow, fantasy football, your friends, and work without me whining about it! ? Only 16 more days left! ?”

Johnson is an American actress, model, and host, who has been in the business for over 10 years. At just 19 years old, Katy packed her bags and moved to Los Angeles from her hometown Boone, Iowa.

Along with the amazing opportunities Katy has had as a model, she has also had a successful career as an actress; she has been featured in commercials for Kodak, KFC, Butterfinger, and Carl’s Junior; as for television and film she starred in the unscripted drama series, “Clifton Shores,” as well as a few indie films including, “2001 Maniacs Field of Screams,” “Black Limousine,” and “Nightfall.” While she has been the lead in several projects, she has also had smaller roles in incredibly acclaimed movies and TV shows such as, “Transformers 2,” “Monk,” and “Greek.”

On top of all of her experience in TV and film, she’s also appeared in music videos for artists like Britney Spears, Rascal Flatts, and Pittsburg Slim! Katy’s experience doesn’t stop there, while she shines as an actress and a model, nothing compares to who she is when she portrays, well, herself. Katy has been a host for Bikini Destinations, Karbon TV, and Celtic Quick News in Scotland.

Recently, Katy was trying to find a way where she could combine her career with her true passion and that is when she came up with “One Model Mission.” Her mission is to be the first model to travel to every single country with the purpose to find beauty in women of all shapes, sizes, and forms. Katy’s ultimate goal is to meet these women and learn about their countries, their lives, and what beauty means to them. During this journey, she hopes to empower each and every woman she meets, as well as those following her journey.

Katy has now traveled to 65 countries, interviewed 51 women, and will continue her mission on her next leg to all of Latin America and The Caribbean starting in the new year.

Johnson is a serious advocate for women’s equality and empowerment and continuously strives to be a positive asset to any and all women who reach out to her whether it is for advice, friendship, or just someone to share a laugh with. She is incredibly passionate about making others love themselves in order to live a more confident and happy life. One of her greatest personal goals is to help women of all ages earn what they deserve, to encourage them to never settle for less, and last but not least, Katy wants women to believe in themselves even in their darkest times and wants all women to know that they are all beautiful in their own unique way.

Along with women empowerment, Katy is a huge advocate for several other organizations including, suicide prevention and awareness; she is a member of The American Foundation for Suicide Prevention. Katy is passionate about mental health and suicide awareness and prevention as she lost her ex-boyfriend, whom she lived with and shared a life with for 4 years to suicide.

Another cause Katy is passionate about is animal rights. She is a member of PETA, as well as the National Humane Society, and does not support Zoos and Seaworld. She donates money and her time each year when there are supportive projects around Los Angeles as well as peaceful protests.