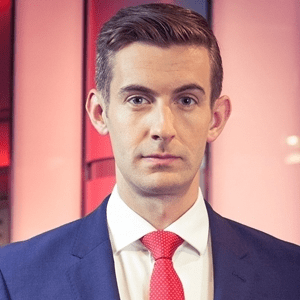 Ben Thompson is a media personality serving as a presenter on BBC Breakfast as well as co-hosting Business Live on the BBC News Channel and BBC World News. Previously he was BBC New York and Middle East Correspondent.

Thompson is a British national.

His parents are unknown. However, on April 22, 2021, he heard Naga chuckling on the programme when they spoke about landlines. He revealed he still has a landline and uses it to call his mum.

Thompson is gay and has been married to his partner Andy Roche for 10 years. On January 24, 2021, he shared a post on his Instagram account captioned, ‘Happy ten years @andyroche. Can’t believe you’ve put up with me for ten actual whole years. Love you.’

Based in the UK, Ben presents on BBC Breakfast as well as co-hosting Business Live, the BBC’s daily business Programme broadcast around the world on the BBC News Channel and BBC World News. He has reported from all over the world for the BBC covering stories in Asia, the Middle East, Europe, and America. Ben began his BBC career in 2001 at Radio Wales in Cardiff. Whilst studying at university, he produced the network’s morning news programme, Good Morning Wales. He was then selected for a BBC Trainee Scheme, working in different parts of the newsroom and getting a taste for television.

After completing his studies, Ben moved to London to start work in the Business & Economics Unit of BBC News. There, he was the business producer for the rolling news service BBC News 24 and the BBC’s international news channel, BBC World.

He later joined BBC Breakfast as a producer, swapping international time zones for night shifts and early mornings to explain how money, savings, pensions, and pay affect the money in our pockets and our own personal finances. In 2008, he become the BBC’s Middle East Business Correspondent. Based in Dubai, Ben spent three years traveling the length and breadth of the region including Egypt, Algeria, Syria, Lebanon, Jordan, Qatar, Kuwait, and Saudi Arabia.

From there, Ben returned to the UK to become the Business Presenter for the BBC News Channel at a particularly busy time for the global economy. As the financial crisis dominated the headlines, Ben kept viewers updated with the latest business and market news and the economic fallout of the global debt crisis. He also helped make sense of complex moves in global markets and the actions of bankers and politicians around the world as they tried to contain the growing crisis.

Soon after, he moved to New York to become the BBC’s North America Business Correspondent. On Wall Street every morning, he reported live from the floor of the New York Stock Exchange, before meeting business leaders, technology entrepreneurs, and international investors in one of the world’s financial capitals. With the financial crisis still dominating the headlines, it proved to be a particularly volatile period for global stock markets and that volatility continued when he covered Hurricane Sandy as it hit New York.

When half a million New York residents were evacuated, Ben ran the other way to the BBC bureau to keep global viewers up to date. For two days he reported almost continuously for BBC TV and radio (whilst sleeping in the office) and spent days without power and water at his apartment in the city. Whilst based in New York, Ben also covered the US Presidential Elections and the deadlock in American politics that nearly pushed the US economy into bankruptcy.

On December 21, 2021, Ben announced he will be leaving BBC Breakfast after ten years of working there. He posted that he will be hanging up his ‘hard hat’ after joining back in 2011. Ben usually works on the business segments of the show, occasionally taking on a presenting role as well. He said he would be moving on from the programme in the new year but will be sometimes returning for weekend episodes.

Ben posted a series of tweets to inform his followers of the situation as well as to pay tribute to his colleagues. While sharing a series of throwback photos he wrote: “I’m hanging up my @BBCBreakfast hard hat and hi-vis in the New Year, so here’s a little thread of some of my ten years on the road, getting access to some of the most interesting and amazing businesses, and taking you with us.”

“Starting out was terrifying but I quickly learned that you’re in safe hands with the brilliant @BBCBreakfast team. We moved from Television Centre in London to MediaCity in Salford in 2012.

He said he’d be moving back to the global channel BBC World as he also thanked those who let them do stories on them.

“(And for those who often ask why we’re ‘stuck outside’, TV is about showing you stuff, otherwise it’s radio).

“Thank you to everyone running a business, big or small, for letting us in, letting us poke around and ask questions. I’m in awe of how resilient and determined you are. You just crack on.”

Ben paid particular attention to the struggles everyone has faced over the last two years when it’s come to the Covid pandemic. He also paid tribute to the business team at the BBC where he spent most of his time working.

He tweeted: “Especially these last two years. We just ask questions, you have to have the answers.”

“Thank you to our little Business team on BBC Breakfast. They do all the hard work; planning, organizing, fixing, and producing the stories every day AND travel with us on the road.

“They make the early starts and long days much more bearable.”

He has an estimated salary ranging from $1 million – $5 million.