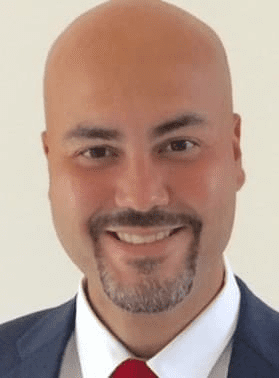 Alberto Rullán is a media personality serving as a News Anchor on weekdays at 6 p.m. and 11 p.m. at Telemundo 62 in Philadelphia. He joined Telemundo62 in September 2019. Previously, he was a Weekend Anchor and Breaking News Reporter at Telemundo47/WNJU in New York.

Rullán is American by nationality.

There isn’t much information about his parents. However, Rullán was raised by a single mother. Therefore, he wants to help combat the struggles single parents in the Latino community often face. He is also passionate about causes related to children and families including education, health and wellness, and access to sports.

Alberto and his wife Haydeé Rosario, a journalist are blessed with two kids, Mayela and Hendrick.

During the Christmas holidays, Alberto remains very close to his traditions.

“There is a celebration we take very seriously, which is that of the Three Kings,” he said.

“We always teach Mayela and Hendrick that on January 5th they have to look for the yerbita and put it in the box under the bed so that the camels can eat and the Kings give them gifts.”

“The Three Kings tradition is very important to us! In fact, my children tell it to their little friends at school, who don’t follow that same tradition. Of course, it cannot be missed that we have the longest Christmas in the world, ”he added.

Alberto is an anchor for Telemundo62. You can watch his live newscasts on weekdays at 6 p.m. and 11 p.m. He joined Telemundo62 in September 2019 and he is excited to serve the people and communities across Greater Philadelphia.

“I’m passionate about connecting with our audience,” said Alberto. “I want to be the person they trust and depend on for the most important decisions concerning them and their families.”

One of the most memorable stories Alberto covered was the impact Hurricane Maria had on his homeland of Puerto Rico.

“The aftermath of Hurricane Maria was the most emotionally and physically challenging story I’ve ever covered. I was not only witnessing a devastated island – I was also racing against time to find my family.”

Alberto joined Telemundo62 after spending four years as a weekend anchor and breaking news reporter at Telemundo47/WNJU in New York. Prior to that, he worked as an anchor and reporter for WAPA in Guaynabo, Puerto Rico. He also spent three years as a radio reporter, editor, and producer at WKAQ in San Juan, Puerto Rico.

Alberto is a three-time Emmy award winner and recipient of several awards from journalistic organizations in Puerto Rico, Latin America, and Europe. He is passionate about causes related to children and families including education, health and wellness, and access to sports. Raised by a single mother, he also wants to help combat the struggles single parents in the Latino community often face.

When he is not anchoring the news, he enjoys spending time with his wife and two children, playing basketball, and restoring classic cars.