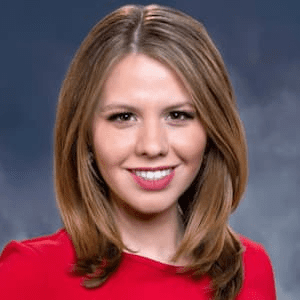 Belén Smole is a 9x Emmy Award Winning media personality serving as a News Anchor at Telemundo62. She joined Telemundo62 in March 2022. Previously, she was a Consumer Investigative Reporter and Fill-in Morning Anchor at KXLN-TV, the Univision affiliate in Houston.

While at UCA, she became a professor and completed her training in front-camera driving classes with Sandra Borghi and Mario Massaccesi.

Smole is the daughter of an accountant and a dentist. Her grandfather Don José Smole came to the country after World War II, on a journey that became possible thanks to the help of the Vatican. “They gave him two choices: Canada or Argentina. And legend has it that when he came to Buenos Aires, on a national date, he saw a big caceroleada in the Plaza de Mayo and felt like he was coming to paradise.”

Belén is married to Brandon Cowan, an American she met on Tinder. The couple tied the knot in October 2019 at a castle in Nashville.

Smole is a news anchor at Telemundo62. She joined Telemundo62 in March 2022. She also joined Alberto Rullán on the anchor desk on weekday evenings at 5 pm. and 6 pm.

“We are excited to have Belén join the Telemundo62 family,” said Ana Hernandez, News Director for Telemundo62. “She is a dedicated journalist and brings a wealth of knowledge and broadcasting experience with her to serve our audience.”

Smole came to Telemundo62 from KXLN-TV, the Univision affiliate in Houston where she served as a consumer investigative reporter and fill-in morning anchor. Prior to that, she worked as a general assignment reporter and multimedia journalist at KCEC-TV in Denver, Colorado. While there, she also served as a fill-in anchor for the station’s newscasts in Colorado, New Mexico, and Kansas. Before that, Smole spent time as a digital media intern at CNN en Español in Atlanta.

“I look forward to getting to know the local community, their problems, and how we can help them through helpful information and available resources,” she said. “I hope to become that trusted source of information our audience relies on, a bridge between the complicated matters of our world and the reality of our daily lives, and how one impacts another.”

Since arriving in the United States, Smole has worked for major networks such as CNN and Univision and has been recognized with nine Emmy Awards for Outstanding Investigative Reporting Talent in 2020 and 2021, as well as General Assignment in 2019. Her Investigations Produced and Directed for it from start to finish have achieved statuettes in the categories of best public affairs specialist, education, business, technology, and special assignment, among others.