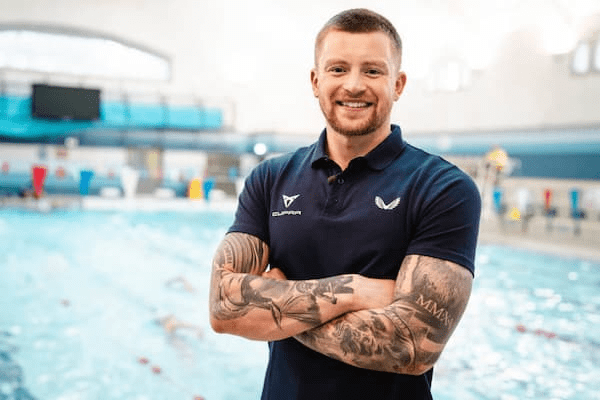 Peaty is British by nationality.

Adam is the son of Mark and Caroline Peaty. He was born and raised in Uttoxeter, Staffordshire alongside his three siblings; two brothers James Peaty and Richard Peaty and a sister Bethany Peaty. He is also the youngest of four children.

As a young boy, he developed an acute fear of water and was averse to being put in the bath after his brothers told him that sharks may come up through the plughole. At 4 years of age Peaty and his friend both went on their first swimming lesson together. It was at this swimming lesson where he lost the fear.

When Peaty won the men’s 100m breaststroke and also became the first British swimmer to defend an Olympic gold, his mum admitted the weight of history got the better of her and that she had been “petrified”.

She said: “Normally it’s all screams and everything in the Peaty household… but last night was really quiet. I was just pushing myself back into the sofa because I was petrified.

“The more that they exceed, the bigger the expectation – we felt it so heavy this time.”

His dad described his achievement as “fantastic”.

Adam isn’t married. However he is dating Eirianedd Munro. The duo met while Peaty was training at Loughborough University where his girlfriend Munro was a student.

In April 2020, he announced that he and his girlfriend were expecting a baby boy. George-Anderson Adetola Peaty was born on 11 September 2020.

In October 2021, Munro took to TikTok and shared a cryptic post. She posted a video about a man “dating other girls”. The video came after Peaty and his Strictly Come Dancing partner Katya Jones sparked a social media frenzy last weekend. The dancing duo appeared to “almost kiss” following the pair’s sultry Argentine Tango routine.

In the video Munro took part in a popular TikTok trend. The caption read: “I could do with some acting lessons lmao [laugh my a** off].”

Playing the part of two anime characters, she lip-synced: “Huh? What do you mean? You’re seriously going to date other girls.”

Munro continues: “I don’t want you to. If I see you with another girl… I’ll kill her.”

In August 2021, Peaty was announced as a contestant on the nineteenth series of Strictly Come Dancing. He is paired with his partner, Katya Jones.

Peaty is a swimmer from Great Britain who specialises in the breaststroke. He is also an eight-time World Champion, a sixteen-time European Champion and a three-time Commonwealth Champion.

He received the FINA award for Best Male Swimming Performance of 2015 after he won 3 gold medals at the World Championships in Kazan. In 2016, he was again honoured by FINA for the best male Olympic swimming performance of the year award after breaking the 100m breaststroke world record at the 2016 Olympics.

Peaty has won the Ligue Européenne de Natation (LEN) Award for best male swimmer for three times in four years for his performances in 2016, 2017 and 2019. He was also named Male World Swimmer of the Year by Swimming World Magazine in 2015 and 2018. He also won Male European Swimmer of the Year for 6 consecutive years from 2014 to 2019.

Peaty was appointed Member of the Order of the British Empire (MBE) in the 2017 New Year Honours for services to swimming.

He has an estimated net worth of $3 Million USD.