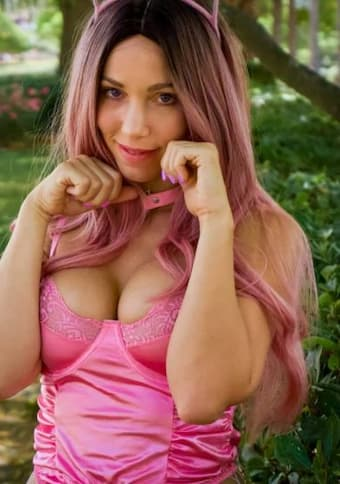 Lana Michaels is an adult video creator. She has also featured in the Channel 4 documentary, Breastfeeding My Boyfriend alongside her partner Shawn.

She is originally from Edinburgh however her age is unknown.

Lana lives in Spain with her partner, Shawn. She is originally from Edinburgh while her partner used to live in Scotland. The duo moved to Spain just before the pandemic in February 2020.

She met Shawn in 2019 via a Vegan dating app. Having moved to Spain to work as teachers in a school, the couple’s plan was thwarted when the country went into lockdown. Soon after, they decided to quit their jobs to launch their own adult content firm, Lana on Demand.

Michaels has two children, a seven-year-old daughter and an 11-year-old son from a previous relationship. When they grew up, she missed breastfeeding them.

Speaking to The Sun, she said: “I breastfed my children and I really missed breastfeeding and the feeling of it.”

Lana explained she breastfed her son for eight months and her daughter for two years – so when they grew up, she was left wishing they were still babies.

Michaels featured in Channel 4 documentary Breastfeeding My Boyfriend together with her partner, Shawn. The show which aired on October 25, 2021 at 10pm revealed how breastfeeding has become such a key part of their sex life and she admits she’d find it difficult to stop.

The couple first experimented with breastfeeding 18 months ago, and Lana argues it creates “physical energy” between them before they have sex.

Speaking to The Sun, she said: “I breastfed my children and I really missed breastfeeding and the feeling of it.”

She added, “I don’t want to have another baby and my children are way too old to feed now but I liked the idea of breastfeeding with Shawn.”

The pair got the idea for adult breastfeeding after having a foursome with another married couple.

“I’d been sucking from another woman when I started feeling milk in my mouth. That burned up the sexual idea of breast milk connected with sex and it went from there,” Lana explained.

After the experience, Lana researched breastfeeding online and learned she could restart her milk supply by taking herbal supplements. She gave them a go, and three days later, her breasts started flowing with milk so Shawn latched on and gave it a try.

“We have sex about five times a week, and Shawn breastfeeds a couple of times in a week,” Lana said, explaining she’s gone up a cup size to 34D since she started lactating again.

Shawn says being breastfed is both arousing and relaxing.

“The energy is flowing between us when I breastfeed… it can lead up nicely to sex,” he said.

The couple also want to show the world that adult breastfeeding isn’t “weird” and that there shouldn’t still be taboos around it.

“There is more negative impact in slaving an animal like a cow than drinking human milk which is made for us,” Shawn argued.

“There is no cruelty or pain in adult breastfeeding. She gets pleasure, I get pleasure, and I get nutrition. She is happy, I am happy, so what’s the problem?”

The couple even charge fellow fans £10 a month to watch videos of Lana breastfeeding Shawn.