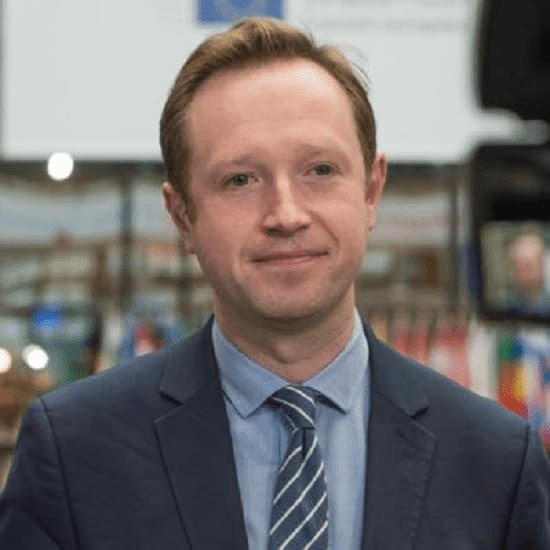 Adam Fleming is a Scottish media personality serving as the chief political correspondent for BBC News. Previously, he served as its Brussels correspondent.

Adam studied at Hutchesons’ Grammar School, an independent school from 1989 to 1998. He went on to Hertford College at Oxford University where he studied Bachelor of Arts in Geography, graduating in 2001 with a first-class degree. While at Oxford, Adam edited The Oxford Student newspaper and worked on local radio.

In 2001 he was sponsored by BBC News to undertake Postgraduate Diploma in Broadcast Journalism at City University London. He graduated in 2002.

Originally, Adam wanted to be a film director, but was introduced to both the Oxford Student and Oxygen radio (now Oxide radio), where he felt he’d “found [his] calling early on”. He says he knew his interests lay in broadcast journalism, rather than print; finding it “a bit more satisfying than the long process of writing a newspaper article”.

Born in Glasgow, Flemings hasn’t shared any information about his parents. However, he has a younger sister by the name of Sally.

Fleming is in a relationship with Pete and they live in London. In 2018 he posted a picture of Pete on Twitter. However, he hasn’t revealed whether he has children or not.

In February 2002, Adam joined the BBC as a reporter/presenter. He worked on CBBC’s news program Newsround while still studying. He has also been a live reporter for BBC News 24 (in 2006), a Westminster reporter (in 2008), and a BBC Three 60 Seconds presenter.

Prior to joining BBC, Fleming worked in journalism for the Herald newspaper in Glasgow, the Daily Record, and STV.