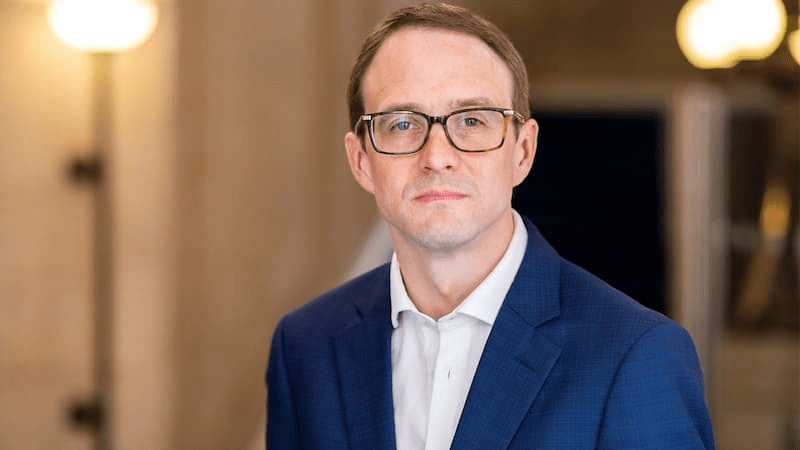 Chris Mason is a British media personality serving as a political correspondent for BBC News. He is also a presenter of the podcast and television programme Newscast (formerly Brexitcast) and the host of Any Questions on BBC Radio 4. In addition, he is an occasional host of BBC Breakfast.

He was born on April 21, 1980, in Airedale Hospital in Steeton with Eastburn, West Yorkshire, United Kingdom. He is 42 years old.

In addition, he graduated with First Class in Master of Arts in Geography from the University of Cambridge in 2001.

Mason grew up in Grassington in the Yorkshire Dales. His parents were both primary school teachers and they taught at the same school. They were also geography coordinators.

His dad’s side of the family has been Dale’s folk for generations while his mum came from “deep down under in Hull” as they would call it, a gentle jibe suggesting Hull was in the south of England. All things are relative.

From an early age, Mason listened to radio, in particular, BBC Radio Lancashire, and his childhood ambition was to present his own programme.

“There are no other journalists in the family, but I loved the little white battery-powered radio I got when I was six. I loved watching Trevor McDonald’s News at Ten in the 1990s and I loved newspapers,” Mason said.

“But I also grew up in an environment where I was surrounded by the beauty of the Yorkshire Dales and also had two parents who were primary school teachers – and both of them were geography coordinators! So whenever we were out and about in the Yorkshire Dales, no Sunday afternoon ramble would be complete without explanations from the age of four onwards about how this was a glacial valley or that was a meander in a river or that was a sedimentary rock or that was a linear village. In other words, geographical education started remarkably young!” he added.

Chris has a younger brother. His brother is married and has two children, a son, and a daughter.

Hi Helen! Yup, my brother and sister in law, niece and nephew live there…just back from our third visit. I’ve spent more Christmases in Dunedin than I have in London!

Mason is married. He and his wife have two children, a daughter and a son born in 2019 and they live in London. Between July and September 2019, Mason took parental leave.

My wife does that too

Mason started his career as a trainee in broadcast journalism at ITN in 2001. After a year, he relocated to BBC Newcastle, where he befriended future broadcaster Rob Young, and then to the BBC regional desk at Westminster. His first report from Westminster was in 2004. For two years, Mason reported for BBC News as a Europe correspondent, followed by a short stint as a political reporter on BBC Radio 5 Live. He then became a political correspondent for BBC News in 2012.

In June 2017, he started presenting the podcast Brexitcast with Adam Fleming and was later joined by Laura Kuenssberg and Katya Adler. It then morphed into Coronavirus Newscast, with the addition of Medical Editor Fergus Walsh, and is now Newscast, led by Adam.

In July 2018 Mason presented the BBC Radio 4 documentary Could the PM Have a Brummie Accent? In November 2018, live on BBC Breakfast, Mason asked “So where are we in all of this Brexit process? To be quite honest, looking at things right now, I haven’t got the foggiest idea of what is going to happen in the coming weeks. Is the Prime Minister going to get a deal with the EU? Dunno! Is she going to be able to get it through the Commons? Don’t know about that, either. I think you might as well get Mr. Blobby back on to offer his analysis, because, frankly, I suspect he is now as good as mine.” Mason was praised for his honesty after his comments were shared on social media and translated into French by the newspaper Le Parisien.

In March 2019 he presented the BBC Radio 4 documentary The Country vs the City. The following month in April, Mason abandoned a news bulletin on The Andrew Marr Show due to technical difficulties.

In October 2019, the website The Conservative Woman described Mason as “mildly irreverent, self-deprecating and congenial… as well as being an experienced and highly competent political broadcaster”.

Mason is an occasional host of BBC Breakfast. Despite previous reports that he might join the new digital station Times Radio, he remains at the BBC.

His net worth ranges from $1 million – $5 million.