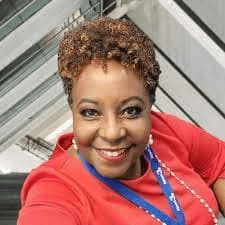 Teresa Whitaker is an American media personality who anchors WRBL News 3 Evening. She joined the WRBL team in March 1987 as a member of the Production department and has worked at WRBL News 3 for nearly four decades. Previously, she was a reporter.

Whitaker is in her 50s. She was born in Fort Huachuca, Arizona. However, her birthday is unknown.

Whitaker is a proud graduate of Kendrick High School, Chattahoochee Valley Community College (CVCC), and West Georgia College (now the University of West Georgia) where she earned a Bachelor of Arts in Mass Communication, with emphasis on Broadcast Journalism.

Teresa was born in Fort Huachuca, Arizona. As an army brat, she has lived abroad and on military posts in the U.S. The Columbus/Harris County area is her home. However, she hasn’t disclosed whether she has siblings or not.

Whitaker is married. However, she has managed to keep her personal life away from the limelight. Therefore, her partner is unknown. She hasn’t also revealed whether she has kids or not.

Teresa joined the WRBL team in March 1987 as a member of the Production department, awaiting an opening in News.

The opportunity presented itself six months later. As a reporter, Teresa has covered a wide range of stories from general assignments to the government to crime. She’s also anchored morning cut-ins, the weekend newscasts, and now anchors at 5,6, and 11 p.m. nightly. As the Health Watch reporter, Teresa is skilled at making people comfortable enough to share the most personal and emotional stories. She recalls one such story about a young man who fell asleep on a railroad track and was struck by a train. He’s grateful a plastic surgeon was able to reconstruct his badly injured foot.

Teresa has been recognized by the Associated Press, the NAACP, and Sisters Inc. which honored her with the Rosa Parks Award of Courage in Communication, ToastMasters International, The Courier-Eco Latino Newspaper, her alma mater West Georgia College and many other organizations.

Outside of work, Teresa enjoys service to her community as a much sought-after emcee, speaker, career presenter, and mentor. She also volunteers at her church with the Women’s Life group and the Dream Center which feeds and clothes homeless and low-income families. She’s a former member of the Columbus Area Habitat for Humanity Board of Directors and an active member of Delta Sigma Theta Sorority, Inc.