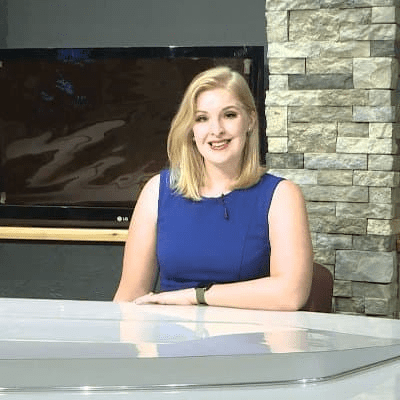 Sydnie Holzfaster is a media personality serving as a digital reporter at FOX 4 News in Kansas City. Previously, she was a multimedia journalist at Fox 42 KPTM in Omaha, Nebraska.

Sydnie went to Cameron High School and graduated in 2013. She also earned her Bachelor’s Degree in Convergent Media from Missouri Western State University in 2017.

Sydnie worked as an editor for the student newspaper, The Griffon News. During her time as an undergrad, she interned at the St. Joseph News-Press as a weekend reporter and at Triumph Foods as a multimedia developer.

A Missouri native, Holzfaster hasn’t revealed any information about her family background, parents’ identities, and siblings.

Sydnie isn’t married. She got engaged on September 7, 2020. However, her fiancé’s identity is unknown.

Holzfaster is a digital reporter at FOX 4 News in Kansas City. She joined the FOX 4 News team in March 2021. She is originally from Cameron, Missouri, and is thrilled to be back home reporting in the Kansas City metro.

Before coming to Kansas City, Holzfaster spent two years working as a multimedia journalist for Fox 42 KPTM in Omaha, Nebraska. While at KPTM, she covered national and local stories including the Iowa Caucus, high-profile court cases, civil unrest in the summer of 2020, and Nebraska’s recovery from the floods of 2019.

She first gained experience in broadcast journalism by working as a multimedia journalist for KQTV in St. Joseph, Missouri, covering local government and the St. Joseph School District. In her free time, Holzfaster likes to kayak, read, and spend time with family and friends.

Sydnie Holzfaster Salary and Net Worth