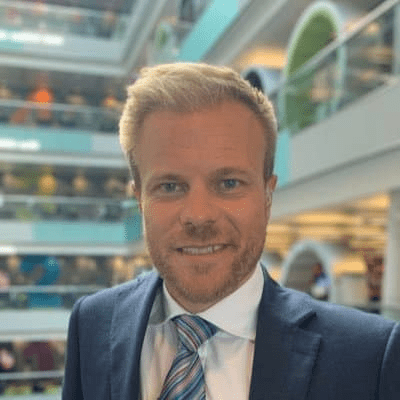 Simon King is a media personality serving as lead weather presenter at BBC. He is also a meteorologist at BBC Radio 5Live and BBC News on weekday mornings. Previously, he was a senior defence meteorologist at Met Office.

King is British by nationality.

He attended Roysia Middle School and Meridian School. He also graduated from the University of Reading with a BSc in Environmental Science of the Earth and Atmosphere. Additionally, he received an MSc in Applied Meteorology in 2002 from the same University.

Simon is married to Emma King and together they have two children, a son, Noah and a daughter, Nell.

In October 2013, Simon delivered his baby daughter Nell. This was after the couple expected a long labour as their son Noah took 12 hours to be born. However, that wasn’t the case.

“We knew we were having a girl; she was coming up for a week late and we did all the things they tell you will kickstart labour, like eating curry. It was a Friday night, we’d been for a curry and went to bed as normal. But around 2:00 am, my wife Emma woke me up to tell me her waters had broken. Not dramatically though, it was more of a trickle. She started feeling some contractions soon afterwards but we didn’t rush to do anything. Going by Noah’s birth, we thought our daughter would be born in the afternoon. I tried to get back to sleep but I was half-awake and aware that Emma was pottering around,” Simon narrated.

“Emma said she needed to go to hospital. The first thing I did was call our friend who is 10 minutes down the road to come round and mind Noah.”

“But there was no time to get to the hospital. Within minutes, Emma told she needed to push. I said: ‘What?! You can’t start pushing, not now.’ I was in denial at first. But I then grabbed some towels called 999 in a bit of a whirl. The operator was very calm and told me to have a look and see what was happening. Already, I’m thinking: this is way more involved than I was expecting.”

“I put the phone on loudspeaker, and had a look. I could see the head. The realisation dawned that the paramedics weren’t going to be here fast enough: I would have to deliver our little girl. I didn’t have time to panic. The operator went through a checklist of what I needed to do.”

Nell was delivered successfully before she was transferred to the hospital with her mother.

King is a lead weather presenter at BBC. He is also a meteorologist at BBC Radio 5Live and BBC News on weekday mornings.

Prior to joining BBC, King worked for Met Office. He joined the Met Office in July 2005 as a Forecaster in the Mobile Met Unit, a specialist unit of forecasters who are also sponsored reserve officers in the RAF. After training with both organizations, he was posted as Flying Officer to RAF Benson. He was then posted to operations in Iraq.

On his return, King was assigned to BBC Weather in August 2008, presenting across the entire BBC News output, as well as BBC World. In 2010, he was deployed to Camp Bastion, Afghanistan.

From 2003-2005, King was a flood forecaster for an Environmental Agency. Apart from his journalism career, he is also the author of ‘What Does Rain Smell Like?’

In 2019, Simon underwent a hair transplant. This was after he realised his hair was thinning.

“I’m a self-conscious person and seeing myself in my autocue every day made it worse. Over the past couple of years I really noticed my hair thinning,” Simon said.

“To be honest it became more than a distraction. My hair loss knocked my confidence to the extent I sometimes felt anxious before delivering the weather,” he added.

“I became pre-occupied with other men’s hairlines and haircuts. Watching my forecasts back I imagined how I’d be with a full head of hair. I wasn’t ready to shave mine off. I feel too young at heart. So, I looked into hair transplants.”

Simon turned to Ryan Giggs’ Cheshire MHR Clinic where he underwent a procedure that saw 3,700 hairs extracted from the back of his head. He also takes hair loss tablets and undergoes regular laser therapy to thicken the hair on his crown.

After unveiling his new look to BBC viewers, Simon took to Instagram to pre-empt any trolls and haters. Sharing a snap of his new hairdo, he wrote: “I know the jury is out with regard to hair transplants. ‘Do you shave it off, have the surgery or let it be?”

“Some people may call me vain. Others will say worse things, I’m sure. It is a personal decision and it wasn’t a difficult one for me. The truth is I’ve already noticed a difference in my demeanor,” he said.

“There’s a new confidence in me and I feel happier. Mrs. King has noticed it too. She says I have a spring in my step and that I look ‘damned handsome’, which pretty much made my day.”

“I’m now excited to see my hair grow back fully.”

Simon King Salary and Net Worth