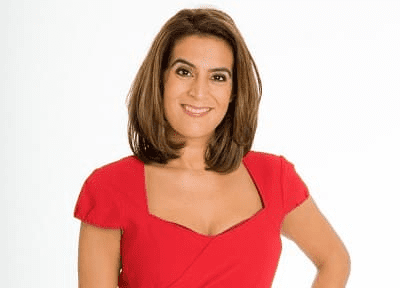 Samantha Simmonds is a media personality serving as a broadcaster and journalist working across BBC TV as a news presenter including host of ‘Politics London’. She is also the co-founder of ‘Find Your Expert’ as well as the co-host of podcast ‘It’s a Grown up Life!’

Simmonds is a British national.

In 1991, Samantha graduated from Leeds Girls High School. She also graduated from the University of Liverpool with a Bachelor of Arts in History and Communication Studies in 1994 and with a Postgraduate Diploma in Broadcast Journalism from City University in London in 1995.

While at the University of Liverpool, Simmonds appeared as a contestant on the ITV television show Blind Date. She was also the head of Dramsoc, member of the student council as well as the editor for the university newspaper.

Born in Bradford, Samantha grew up in Leeds. She is the daughter of an Iranian mother, Shahnaz and a Yorkshire-born father, Stefan. Her mother arrived in the UK from Iran in the 1960s and now lives in Cheshire while her father still lives in Leeds.

Her grandfather, Paul Simmonds, was a cameraman on Calendar.

She was raised in a “culturally Jewish” home. However she hasn’t shared whether she has siblings or not.

Samantha is married to Phillip Davies, a business consultant. She “re-connected” with him in shul one Yom Kippur.
“We had known each other for many years,” she said.

The couple have three children, two sons, Rafael and Zevi and a daughter, Zeabella. They live in north London. They are also members of Muswell Hill synagogue.

Simmonds is a broadcast journalist, podcast host, corporate moderator and inspirational speaker. She is also co founder of a new directory connecting diverse expert voices to the media www.findyourexpert.co.uk

Currently, she is presenting on Sunday Politics on BBC 1, BBC World News, the BBC News Channel and BBC Business programmes including The Briefing / Work Life – covering all the latest national and international developments and interviewing some of the most significant names in politics and business. She has also presented BBC Radio 4’s One to One series and on BBC Radio London and BBC Radio Berkshire.

Previously, Samantha was a presenter at Sky News for more than 10 years, anchoring coverage of some of the biggest stories of the decade including the deaths of Michael Jackson and Amy Winehouse, the murder of British MP Jo Cox and the EU referendum results. She also presented live coverage of the Queens 90th Birthday celebrations, the Royal wedding from outside Buckingham Palace and the London 2012 Olympic opening ceremony.

Samantha’s lively and engaging presentation skills make her a very popular choice for corporate hosting and motivational speaking. She regularly hosts awards ceremonies and conference events including for the Department of Trade and Industry, Hewlett Packard, Sainsbury’s, Manpower Group and Deloitte.

She also writes regularly for the national press about the challenges of being a working mum and she hosts a topical and entertaining podcast ‘It’s a grown up Life’.