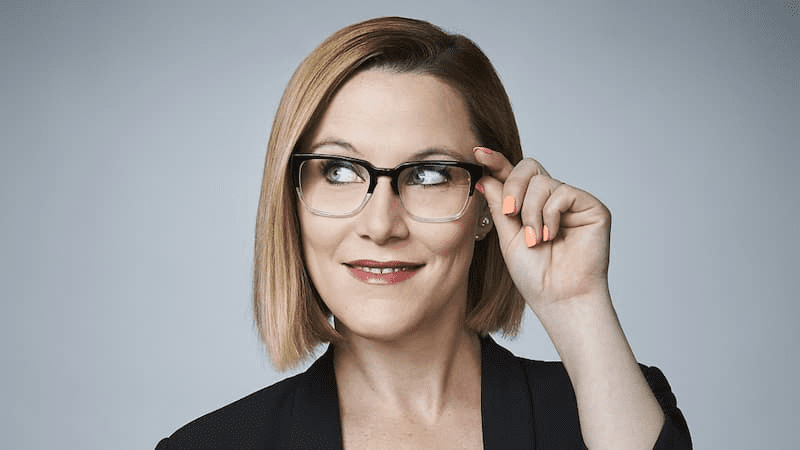 S.E. Cupp (Sarah Elizabeth Cupp) is an author, television host and a political commentator for CNN. She is also the host of CNN’s SE Cupp Unfiltered, a weekly program covering the white-hot intersection of politics and media.

Elizabeth attended the Academy of Notre Dame in Andover, Massachusetts. She also studied ballet from six years old until she was in her late teens. While attending ballet school, she suffered from eating disorders and experienced a relapse during her college years.

In 2000, she graduated from Cornell University with a Bachelor of Arts degree in Art History. While there, she worked for The Cornell Daily Sun.

Additionally, Cupp earned a Master of Arts degree from the Gallatin School of Individualized Study at New York University with a concentration in Religious Studies.

Growing up, Sarah describes herself as the unpopular kid. “I moved around a lot as a kid. For me it was always an adventure. It was tough to change schools and continually be the new girl, but I found upside in every new place.”

She is the daughter of Patricia Cupp. However, her father is unknown. It is also not known whether she has siblings or not.

Sarah is married to John Goodwin. The couple tied the knot in November 2013. Her husband is currently the Head of Communications for The Weather Channel. Previously, he was the former chief of staff to Representative Raúl Labrador.

They met at the 2008 Republican Convention. However, they started dating in 2011. In September 2012, they became engaged.

Cupp and her husband have a son together. Their son, John Davies Goodwin III was born in December 2014. She relocated from Washington, D.C. to Connecticut.

Cupp is a political commentator at CNN. Most recently, she hosted CNN’s SE Cupp Unfiltered, a weekly program covering the white-hot intersection of politics and media. Prior to that she led a panel-driven show on HLN that debated contemporary issues impacting the country. She joined CNN as a contributor in 2013 and HLN as a host in 2017.

Leading up to her move to CNN and HLN, Cupp was the host of S.E. Cupp’s Outside With Insiders, a digital series on CNN.com where she took political insiders to the great outdoors. Past guests included Gov. Scott Walker (R-WI) and Rep. Mark Sanford (R-SC) among others. From 2013 to 2014, she co-hosted “Crossfire” on CNN, the relaunched political debate program with panelists Newt Gingrich, Stephanie Cutter and Van Jones. Before joining CNN as a host and political commentator, Cupp co-hosted MSNBC’s roundtable show, The Cycle.

Cupp continues to be a nationally syndicated political columnist, culture critic, author and consultant. She regularly writes for the New York Daily News, Glamour and CNN.com. She is also the author of “Losing Our Religion: The Liberal Media’s Attack on Christianity” and co-authored “Why You’re Wrong About the Right” with Brett Joshpe. Previously, she was a consultant for Apple TV+’s The Morning Show starring Jennifer Aniston, Reese Witherspoon, and Steve Carell and HBO’s hit series, The Newsroom. She has also been a contributor to The Blaze’s Real News and contributing editor for Townhall Magazine.

Alumni of Cornell University, Cupp serves as an advisory member for their Institute of Politics and Global Affairs. In her free time, she enjoys hunting, fishing and camping with her family.

On August 20, 2020, Cupp announced that she would be voting for Joe Biden in the 2020 United States presidential election. This is despite her being a member of the Republican Party, the same party whose Presidential candidate was Donald Trump.

On her CNN Show, Cupp said the “goodness” of Joe Biden was “enough of a reason” to convince her to vote for the Democratic nominee over President Donald Trump in the 2020 election.

“Biden’s goodness, his character, his love for this country and for other people suddenly felt so much more important.”

“After four years of a corrupt, unethical, narcissistic, racist, sexist, bullying, shaming, vengeful, spiteful, greedy, needy, lying jerk in the White House, goodness has been gone for too long,” she added.

She also acknowledged that there’s “a lot” of issues on which she and Biden disagree, “but we need to make America good again and I know Joe Biden wants to do that too.”

“Biden’s goodness is enough for me,” she added. “That’s why he’s getting my vote.”

In January 2021, S.E. added that, “If we’re going to move on from this ugly chapter and help ensure it never happens again, it’s important to know what it is and what it isn’t. So let’s be clear: The rioters who stormed the Capitol, who broke the law, violated the Constitution, and endangered the lives of Americans, and everyone who incited and protected them, didn’t do it in the name of conservatism. They did it in the name of Trump.” This was after Pro-Trump mob stormed the U. S Capitol on January 6, 2021 after Biden was declared the 46th President of the United States.

New York lawmakers, including both U.S. senators, have called for him to step down. President Biden also went as far as saying that if the investigation of the accusations against him prove true, he must resign, and likely face prosecution.

In an article Cupp said, “But another famous Don, Donald Trump, would later earn the nickname for his flagrant refusal to own up to any of the well-documented financial, legal and personal transgressions he was accused of, continuously dodging the long arm of the law, and accruing wide swaths of loyal supporters who, it seemed, loved him for this very defiance and invincibility.”

She continued, “If, at the end of it, “everybody makes their own decisions” about its findings, what is the point? For Cuomo, like Trump, truth is merely theoretical now, malleable and downright bendable. He may as well just preemptively call the conclusion of the investigation “alternative facts. He’s also, like Trump, refusing to go anywhere, regardless of what happens.”

However, Cuomo said, “I did nothing wrong, period, and I’m not resigning, and I’m doing my job every day.”

Cupp concluded the article by saying, “This behavior isn’t just unbecoming. It’s un-Democratic. It has no place in elected office. It was wrong for Trump. It’s wrong for Cuomo. Let’s just hope the Teflon’s finally wearing off.”

Cupp has been an atheist for over twenty years. Although, she has consistently stated that she is open to theism. During an interview with C-SPAN she said, “I really aspire to be a person of faith some day.”

She is also a member of the Republican Political Party.

S.E. Cupp Salary And Net Worth

She earns an average salary of $500k per year. She also has an estimated net worth of $6 million.